Preliminary research by a team from the Chinese Academy of Sciences in Wuhan showed that Internet addicts had changes in the white matter of their brains and disruptions in the connections in nerve fibers linking brain areas involved in emotions, decision-making and self-control.

Researchers say their discovery, published in the Jan. 11 issue of PLoS One, could lead to new treatments for addictive behavior.

For the study, the research team led by Dr. Hao Lei of the Chinese Academy of Sciences in Wuhan carried out brain scans of 35 men and women aged between 14 and 21.

Based on their answers to a psychiatric diagnostic questionnaire, half of the group—at least 17 young adults—were classified as having Internet addiction disorder (IAD).

Specialized MRI scans were then done on the participants. The scans showed changes in the white matter of the brain—the part that contains nerve fibers—in those grouped as being web addicts, compared with non-addicts.

Evidence of disruption to connections in nerve fibers linking brain areas involved in emotions, decision-making and self-control was found.

“The results also suggest that IAD may share psychological and neural mechanisms with other types of substance addiction and impulse control disorders,” he also said.

The brain changes and their associated behavioral effects were analyzed based on the analyses of 40 previous brain scan studies on people with substance abuse and other forms of addiction, as well as baseline brain scans that identified the functions of each brain region.

The study was approved by the Ethics Committee of RenJi Hospital of Shanghai Jiao Tong University Medical School. The participants and their parents or legal guardians were informed of the aims of our study before MRI examinations and full written informed consent was obtained from the parents/guardians of each participant.

Findings confirm theories
Similar findings have been found in video game addicts, according to Prof. Gunter Schumann, head of biological psychiatry at the Institute of Psychiatry at King’s College, London.

“For the first time two studies show changes in the neuronal connections between brain areas as well as changes in brain function in people who are frequently using the internet or video games,” he told BBC.

“We are finally being told what clinicians suspected for some time now: that white matter abnormalities in the orbito-frontal cortex and other truly significant brain areas are present not only in addictions where substances are involved but also in behavioral ones such as internet addiction,” she said.

But further studies on internet addiction effects with larger numbers of subjects were needed to confirm the findings, she cautioned. 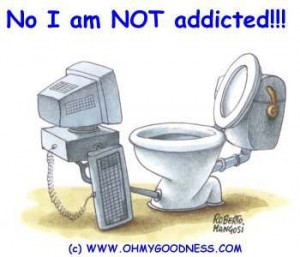 New disorder
IAD has been identified as psychiatric disorder since 1998. Also called problematic or pathological Internet use, psychiatrists describe IAD as a person’s inability to control his or her use of the Internet, leading to distress and disruption in academic performance, social interaction, occupational interest and behavioral problems.

The disorder is diagnosed in part by answers to the Young’s Diagnostic Questionnaire for Internet Addiction adapted by Beard and Wolf.

According to the British newspaper, The Independent, about five to 10 percent of Internet users are unable to control their usage and are considered addicts.

According to Dr. Jones, hardcore gamers are more likely to be addicted to the Internet.

“The majority of people we see with serious Internet addiction are gamers—people who spend long hours in roles in various games that cause them to disregard their obligations,” Jones told The Independent.

“I have seen people who stopped attending university lectures, failed their degrees or their marriages broke down because they were unable to emotionally connect with anything outside the game.”

Are you an Internet addict?
If you answer yes to questions 1 to 5 and at least one more answer, you may be suffering from Internet addiction disorder, and may want to see a doctor about this.

1. Do you feel preoccupied with the Internet?
2. Do you feel the need to use the internet with increasing amounts of time in order to achieve satisfaction?
3. Have you repeatedly made unsuccessful efforts to control, cut back or stop internet use?
4. Do you feel restless, moody, depressed or irritable when attempting to cut down or stop Internet use?
5. Do you stay online longer than intended?
6. Have you jeopardized or risked the loss of a significant relationship, job, educational or career opportunity because of the Internet?
7. Have you lied to family members, a therapist or others to conceal the extent of involvement with the internet?
8. Do you use the Internet as a way of escaping from problems or of relieving a distressed mood (e.g. feelings of helplessness, guilt, anxiety and depression)?

Related Stories to Internet Addiction Effects Changes to Your Brain:
Bad Effects of Too Much Texting or Social Networking
Hot Laptops on Your Lap Cause Scrotal Hypothermia
Is Wi-Fi Bad For Your Health?