Scrotal Hyperthermia: Hot Laptops Causes Infertility? Hey guys, just because laptops are called laptops doesn’t mean that you should place them on your laps. As we said in “Bad Effects of Laptops”, using your computer in this manner can give you what scientists call the Toasted Skin Syndrome.

But here’s another reason why men — girls get a pass on this one — should avoid placing hot laptops on their lap area: overheated laptops can, to use the words of a Reuters news report, cook your testicles. Well, if you want some fried testicles to serve for breakfast then go ahead and heat ’em with your computer. We’re pretty sure Dr. Hannibal Lecter will approve.

But if you want a normally functioning pair of balls that produce healthy sperm cells that make healthy babies, then you should never ever work with your laptop on your lap. 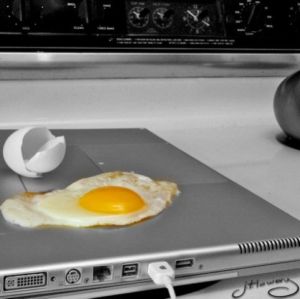 Anyhoo, here’s a Reuters story about guys who end up with “overheated balls” because of them damn laptops:

The researchers hooked thermometers to the scrotums of 29 young men who were balancing a laptop on their knees. They found that even with a lap pad under the computer, the men’s scrotums overheated quickly.

“Millions and millions of men are using laptops now, especially those in the reproductive age range,” said Dr. Yefim Sheynkin, a urologist at the State University of New York at Stony Brook, who led the new study.

“Within 10 or 15 minutes their scrotal temperature is already above what we consider safe, but they don’t feel it,” he added.

Har. Har. We don’t know who to make fun of in this story, the young men whose scrotums (scrota?) were hooked with a thermometer or the researchers who cooked up the idea of hooking thermometers on other people’s private area? Do you think the genius researchers got some funding from some agency/philanthropist?

But maybe they found something very, very important, huh?

So far, no studies have actually tested how laptops impact men’s fertility, said Sheynkin, and there is no bulletproof evidence that it would. But earlier research has shown that warming the scrotum more than one degree Celsius (1.8 degrees Fahrenheit) is enough to damage sperm.

Under normal circumstances, the testicles’ position outside of the body makes sure they stay a few degrees cooler than the inside of the body, which is necessary for sperm production.

“I wouldn’t say that if someone starts to use laptops they will become infertile,” Sheynkin told Reuters Health. But frequent use might contribute to reproductive problems, he said, because “the scrotum doesn’t have time to cool down.”

Okay, so its not established that overheated scrotums end up infertile, but you don’t want to take the risk, do you?

Just so you’re safe fertility-wise, if you have no place else to put your laptop but your lap, you should spread your legs wide to protect your jewels from the heat. This is not 100% effective but you are less likely to end up with “scrotal hyperthermia” or, in layman’s parlance, overheated balls.