Celebrities With Huntingtons Disease. What is Huntington’s Disease? Named after American physician George Huntington, who was the first to describe the condition, Huntington’s disease is an inheritable neurological disorder which affects movement, cognition (perception, awareness, thinking, judgement), and behavior and which gets progressively worse over time.

Symptoms of the disease most often manifests between the ages 35 to 55 years old. Nonetheless, features of the disease can also show from as early as infancy to the late stages of a person’s life.

The symptoms of Huntington’s disease vary from person to person. However, according to wikipedia, the “earliest symptoms are often subtle problems with mood or cognition. A general lack of coordination and an unsteady gait often follows. As the disease advances, uncoordinated, jerky body movements become more apparent, along with a decline in mental abilities and behavioral symptoms.”

Worldwide Prevalence of Huntington’s Disease. Around the world, cases of Huntington’s disease are found in 5-10 out of 100,000 people. There does not appear to be a difference in the numbers for men and women while some variance is recorded for ethnic groups and geographical locations.

For instance, rate of occurrence is highest in peoples of Western European descent, averaging around 7 per 100,000 people while only about one case per million is recorded for people of Asian and African descent.

According to nhs.uk, the rate of Huntington’s disease in the United Kingdom is 12 per 100,000 people.

Celebrities With Huntingtons Disease. Since we are all about celebrity health this month, we can’t post this write-up without including a list of famous people who were diagnosed with Huntington’s disease. Let’s begin our list with:

Charles Sabine, NBC News TV journalist. In 2005, he decided to take a genetic test to see whether he has Huntington’s, a disease which affected his father and brother. The test came back positive. He has since worked to promote Huntington awareness, research, and legislation.

More about Sabine from NPR:

“People like me are valuable because we can be the guinea pigs for the future,” he says. “It might be too late for me, but I might be able to provide the testing ground to find something that can prevent this awful disease affecting generations to come.”

By going public about his very personal struggle with Huntington’s, Sabine hopes to put a human face on this genetic disease that afflicts an estimated 30,000 individuals in this country and the families who care for them.

“I wouldn’t say anyone can be a television correspondent and go to Baghdad, but more or less anyone can do that,” Sabine says. “Not anyone can do what I’m doing now. And it just struck me that there was nothing else that I should be doing for as long as I can do this, because it serves a much greater purpose.

“So while I can still put a sentence together, I shall go and do my bit to talk about this disease and raise awareness about it.”

Trey Gray, drummer for country music duo Brooks & Dunn. Trey is next in our list of Celebrities With Huntingtons Disease. Fox25 in Oklahoma City did a feature on him and his condition. Watch:

Gray was diagnosed with Huntington’s in 2003 although he suspected he had it because his mother and uncle also had the disease. Like Charles, Gray is involved in HD — short for Hungtington’s Disease — public awareness and education campaigns. He does not let his condition get him down but is worried about his children who have a 50-50 chance of getting HD.

“I’m blessed,” assures Gray, who turned 45 on Christmas Day. “There’s no ‘Woe is me.’ Millions of people are worse off than I am. Everybody has their crosses to bear, and God never gives us more than we can handle.”

Maybe so, but God gave Gray more than I could handle. I can barely type the facts of Gray’s circumstance, much less live them. But Gray, one of seven people profiled in a new documentary film about living with Huntington’s called “Alive & Well,” is determined, and he’s hopeful.

That’s not to say he’s not troubled. The part about his kids is the stuff that keeps him awake some nights.

“I’ve never had the thing of, ‘Why, me?’ he says. What bothers me is whether it will have an effect on my children.”

Woody Guthrie. You are not a real folk music fan if you do not know who Woody Guthrie is. Haha. He is an icon in the folk music world (as well as the music world at large) and the voice of his generation. Sadly, he was diagnosed with HD back in 1952, a time that not a lot is known about the disease, so his illness was essentially untreated. 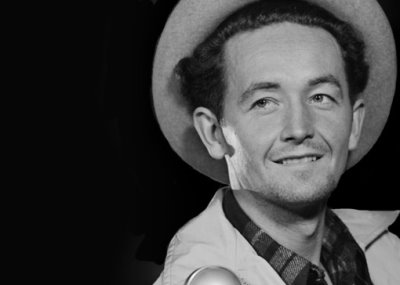 More about Woody and Huntington’s from Al Jazeera:

Nowadays, victims of Huntington’s can live at home, says Nora (Woodie’s daughter, ed.), who is an honorary trustee of the Huntington’s Disease Society of America, which her mother, Marjorie Guthrie, founded in 1968. But in the 1950s, no one paid much attention to the fact that Woody’s mother also suffered from this hereditary disease, which causes shaking and other involuntary muscle movements, forgetfulness, impulsiveness and, sometimes, depression. He wasn’t correctly diagnosed until after his arrival at Greystone, when a previous misdiagnosis of paranoid schizophrenia was discarded.

At Greystone, “there was no care,” Nora says. “When my father picked up his food, he couldn’t control his fingers, and he lost half of it — it stayed on his clothes for days. There was no one there to feed him. There wasn’t a lot of dignity in those experiences.”

Guthrie died at the Creedmoor Psychiatric Center in Queens Village, NY. He was only 55 years old. His death helped increased public awareness of Huntington’s disease and prompted his wife Marjorie to campaign for more research and public funding for this then unknown disease.

The Huntington’s Disease Society of America tells us more:

Soon after his death, his widow Marjorie vowed to do something about this silent killer. At the time, little was known about the disease. Marjorie placed a small ad in a New York City newspaper and slowly gathered a determined handful of volunteers and HD families from across the United States. From that first moment, when Marjorie Guthrie reached out to other HD families, a worldwide movement began that would change the lives of those living with HD and bring hope to families.