NuvaRing Blood Clot Risks and Side Effects: Is It Safe for You to Use? Are you thinking about using the NuvaRing, the birth control vaginal ring? If so, take note: health experts say that women wanting to use NuvaRing because of its effectiveness and convenience must balance these qualities against the fact that the contraceptive may pose a higher risk for blood clots.

The world’s first when it was approved by health regulators in 2001 and hailed as a “no-muss/no-fuss alternative” to the birth control pill, NuvaRing is currently facing a massive, multidistrict federal case in the United States over safety issues. Trials are scheduled to begin this year.

For sure, unlike oral contraceptives, which require taking a pill at the same time every day, NuvaRing is convenient contraception. Inserted just once a month, it is left in the vagina for three weeks, where it delivers hormones directly into the bloodstream.

This convenience has made NuvaRing one of the world’s most popular forms of non-pill birth control: In the U.S. alone, doctors prescribed more than 5.5 million prescriptions in 2010, according to health-care information company IMS Health. That same year, NuvaRing generated US$559 million in global sales for its maker, Merck.

NuvaRing Blood Clot Lawsuit. But safety concerns over NuvaRing have spread in recent years. Claiming NuvaRing has caused them potentially life-threatening blood clots, more than 700 women have filed lawsuits since the contraceptive hit the market in 2002. The women are suing Merck for not disclosing the ring’s health risks fully, and their cases have been consolidated into a massive, multidistrict federal case.

As of May 2011, almost a thousand possible NuvaRing blood clot cases have been reported to the U.S. Food and Drug Authority.

Health experts say all hormone-based birth control drugs increase the risk of clotting, and this is further complicated by smoking, obesity or family history.

The first generation of pills manufactured in the 1960s contained enough estrogen to raise the risk of clots more than ninefold.

Second-generation contraceptive safer? But a second generation of pills developed in the 1970s, containing a smaller dose of estrogen combined with newer forms of synthetic hormone progestin, such as levonorgestrel, norethisterone and norgestrel, were found to be just as effective and safer.

A fourth-generation progestin, drospirenone, used in the top-selling but controversial oral contraceptives Yaz and Yasmin, is effective and is said to alleviate symptoms of pre-menstrual syndrome.

But a number of studies say that third- and fourth-generation contraceptives—along with NuvaRing—raise the risk of blood clots without adding any benefit.

“To me, it’s incredible that (Merck) used desogestrel and not a second-generation progestin. Why not go for the one with the lowest risk?” said Dr. Fritz Rosendaal, an epidemiologist at Leiden University Medical Center in the Netherlands, co-author of one of the studies that found a higher risk for clots in NuvaRing than in second-generation birth control. Dr. Rosendaal has contributed to more than a dozen scientific papers on desogestrel. 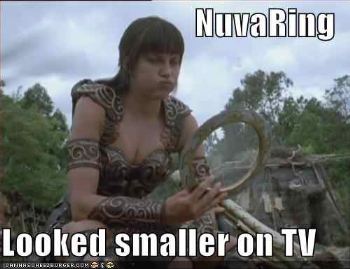 Because NuvaRing was new at that time, it wasn’t named in the petition. But Public Citizen’s director Dr. Sidney Wolfe explicitly concluded: “We’ve told people not to use these drugs and have advised women that the safest contraceptives are the older, second-generation ones.”

The FDA didn’t address Public Citizen’s claims, but after the agency conducted its own review, it ordered Merck to re-label NuvaRing to “clearly reflect safety concerns about an increased risk” for blood clots.

Merck disputes claims that NuvaRing poses a higher risk than other contraceptives. In NuvaRing’s product information pamphlet, Merck acknowledges the findings but says, “Data from additional studies have not shown this twofold increase in risk. It is unknown if NuvaRing has a different risk of [blood clots] than second-generation oral contraceptives.”

Large studies needed
An analysis of 10 randomized studies done by Cochrane Collaboration researchers in March 2010 showed that only two women in a study group of 3,000 women developed clots and one was later found to have a genetic risk. Cochrane is a respected international organization that reviews published scientific data.

According to some studies, too, the risk of blood clots for women on a desogestrel-based contraceptive is about 30 out of 100,000—less than half a percent.

Noting that scientists need to conduct much bigger studies when investigating the effect of marginal phenomena, Merck is currently sponsoring a massive trial of some 30,000 NuvaRing and pill users. The largest, most comprehensive study of the contraceptive so far, the results will be published this year.

Preventive measures
In the meantime, many women still want to use NuvaRing because it is effective — less than one out of 100 women get pregnant each year when they always use NuvaRing as directed and only nine out of 100 women get pregnant each year even when they don’t always use the vaginal ring as directed. But certain drugs and supplements may make NuvaRing less effective. These include:

NuvaRing also provides some protection against:

Some common but milder side effects are:

What to know before taking NuvaRing:

So, if you still want to use the NuvaRing, you can take precautions. Health experts warn women NOT to use NuvaRing if you:

NuvaRing Blood Clot and Family History. Because a family history of blood clots places women at a higher risk for suffering from one themselves, health experts also recommend that women thinking of using NuvaRing get a “clotting workup” or a blood test to detect inherited clotting disorders like factor V Leiden or a protein C or S deficiency.

These clotting conditions are rare—on average, five percent of Caucasians, two percent of Latinos, and one percent or fewer of African-Americans, Native Americans and Asians, have these conditions.

You should also know the telltale symptoms of a blood clot:

Other serious problems usually have warning signs. Report any of these signs to your health care provider as soon as possible:

NuvaRing Blood Clot Risks and Side Effects: Is It Safe for You to Use? Posted 16 January 2012.