Marketing, profit drive demand for robotic surgeries: Aggressive marketing is driving exploding demand for robotic-assisted surgery for prostate cancer, even if new research shows that it isn’t any better than low-tech surgery.

And marketing, in turn, is driven by big bucks that makers and operators of the new laparoscopic robots can make, the New York Times suggests in a report.

One in six American men develop prostate cancer in their lifetime. Treatment options include radiation and watchful waiting, but the most popular is surgery.

“With the stream of prostate cancer patients that come through, this is a big, big business” Dr. Jason D. Engel, director of urologic robotic surgery at George Washington University Medical Center in Washington tells the Times.

But recent research shows that complaints about impotence and urinary leakage were equally common, whether surgery was done by a robot or the traditional way either by laparoscopy (with surgeons manually making small incisions in the abdomen and inserting tools with their own hands to slice out the organ) or by open surgery (with surgeons removing the prostate through one long cut in the belly).

These were the findings of a new survey, published in the Journal of Clinical Oncology’s Jan. 3 issue. The study showed that surgery with a robot might lead to fewer in-hospital complications, but that it might also lead to more impotence and incontinence.

“I wasn’t surprised at all,” a Reuters Health report quoted Dr. Otis Brawley, chief medical officer of the American Cancer Society, as saying. “Unfortunately, robotic prostatectomy — like many things in prostate cancer — has gotten a lot more hype than it should,” he added. Dr. Brawley wasn’t involved in the study.

Over the past years, the Times reported, patients had been walking away out of the offices of urologic surgeons who did not have the new robots and took out cancerous prostates the traditional laparoscopic way.

At age 42, Dr. Jeffrey A. Cadeddu felt like a dinosaur in urologic surgery, the Times said. “Patients interview you,” said Dr. Cadeddu, a urologist at the University of Texas Southwestern Medical Center at Dallas. “They say: ‘Do you use the robot? O.K., well, thank you.’ And they leave.”

Equal impotence, incontinence rates
The new study, done by Dr. Michael Barry and his colleagues at the Massachusetts General Hospital in Boston is based on responses from more than 600 prostate cancer patients on Medicare, the U.S. government’s health insurance for the elderly.

About 400 of them had robotic-assisted laparoscopic prostatectomy, in which the surgeon uses a robot to access the prostate through multiple small holes in the belly. The rest of the patients had traditional open surgery.

In general, there were no differences between the two patient groups, but a few more men who underwent robotic procedures reported urinary problems after the robot procedure.

Maybe higher rates
In contrast, a large, national study of Medicare patients from 2003 to 2007 showed that patients who had laparoscopic surgery — many with a robot — had shorter hospital stays, lower transfusion rates and fewer respiratory and surgical complications than those who had surgery with four-inch incisions. But they also had more incontinence and impotence.

Conducted by Dr. Jim C. Hu of Brigham and Women’s Hospital in Boston and colleagues, the study involved 6,899 men who had surgery with four-inch incisions and 1,938 who had laparoscopic surgery for the study. It was published in October 2009 in The Journal of the American Medical Association.

But the study was not ideal because patients were not randomly assigned to have one type of surgery or another. Also, laparoscopic operations done without a robot were included with the robot-assisted ones because Medicare did not distinguish between the two.

Still, according to the Times, which reported on the study, it is the only large national study that compares what is thought to be a largely robot-assisted surgery group with a group that did not have a robot. 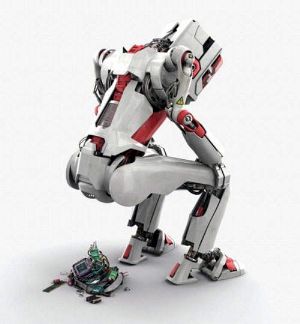 Rapidly rising demand
Despite the fact that there is no good evidence to show it’s better than traditional prostate removal, robotic surgery has been winning converts in the United States and growing rapidly.

According to the robot’s maker, Intuitive Surgical, last year 73,000 American men — or 86 percent of the 85,000 who had prostate cancer surgery — chose to have robot-assisted operations. Eight years ago there were fewer than 5,000, Intuitive says. The Times says this is the only official source for these figures.

Robotic surgery is even more expensive: it adds some US$1,500 to US$2,000 in hospital costs per procedure.

And once a hospital invests in a robot it has an incentive to use it, says Dr. Michael J. Barry, a professor of medicine at Massachusetts General Hospital in Boston. The robots are expensive, after all. They cost US$1.39 million for the machine and US$140,000 a year for the service contract, according to Intuitive. Doctors and patients also become passionate advocates, assuming that newer means better.

“Doctors and medical centers advertise it, and patients demand it,” Dr. Barry said, creating a “folie a deux.”

Writing in the editorial that accompanied the study findings in the Journal of Clinical Oncology, Dr. Matthew Cooperberg, a urologist with the University of California, San Francisco said, “Heavy promotion has catapulted robot surgery to its current status.”

“The problem that is revealed in this paper is this question of expectations,” said Dr. Cooperberg. There is a known issue of regret related to robotic surgery.”

Dr. Cooperberg and his colleagues write, “The robot is impressive technology, allowing the surgeon to sit at a console and direct a camera and two or three laparoscopic arms with six degrees of wristed motion for cutting, retracting, cauterizing, or suturing—all high magnification and three-dimensional visualization,”

But the robot’s ability to reach into small spaces comes with tradeoffs, the Times reports. Doctors undertaking traditional surgery can feel how forcefully they are grabbing tissue, how well they are cutting and how their stitches are holding. With the robot, all that is lost, notes the Times report. The robot is also slow, taking three and a half hours, twice as long as traditional surgery.

“I say robotic surgery has to be better to justify its learning curve — to justify its unknown cancer control, to justify its increased cost,” says Dr. Herbert Lepor of New York University. Dr. Lepor has done more than 4,000 traditional open prostatectomies. Surgeons who do nonrobotic prostate surgery agree.