AICAR Exercise Pill Benefits: It Prevents Heatstroke?: Here’s good news for athletes who are raring to compete in, say, Tucson, Arizona on a hot summer day or cocky soldiers wanting to go on this summer’s tour of duty to Afghanistan, but who are barred from doing so because of an extreme heat sensitivity called malignant hyperthermia.

New research shows that the compound dubbed the AICAR exercise pill or “couch potato pill” because it slows muscle fatigue and improves muscle endurance without exercise may also be used to prevent heatstroke—at least in mice. The findings are found in a paper published by the journal Nature Medicine.

If further tests work out, the compound may be used to develop treatments for extreme heat sensitivity, a genetic condition.

Salk Institute researchers first discovered the muscle-building and endurance-boosting traits of the “potato coach pill” about four years ago. The compound, whose full name is 5-aminoimidazole-4-carboxamide ribonucleoside or AICAR, is now being investigated to develop treatments for muscle diseases and metabolic disorders. 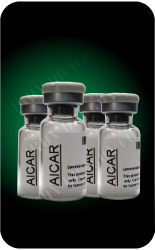 In the new study, researchers from the Baylor College of Medicine found that AICAR also protects mice against malignant hyperthermia.

This deadly condition is linked to a slew of flaws in the gene RyR1 that controls the skeletal muscle calcium release channel.

In people—or mice—who have a mutant form of the gene, a rise in body temperature caused by exertion on a hot day will trigger a calcium leak in muscles cells that in turn sets off a molecular cascade that makes the muscles contract and break down.

Sustained muscles contraction spurs potassium and protein to leak out of muscle cells and into the bloodstream, and toxic levels lead to heart or kidney failure.

Working on mice genetically engineered to have the RYR1 mutation, the Baylor researchers found that AICAR prevented malignant hypothermia in mice by stopping the calcium leak and preventing the vicious circle from getting under way.

“We have shown that it acts directly on the ryanodine receptor to decrease the calcium leak. It also protects intracellular calcium stores from depletion and this contributes to the ability of this compound to slow muscle fatigue,” she explained.

“When we gave AICAR to the mice, it was 100 percent effective in preventing heat-induced deaths, even when we gave it no more than 10 minutes before activity,” she added.

One person in every 3,000 persons is believed to have the mutant RYR1 gene and these extremely heat-sensitive people may benefit if the study’s findings lead to the development of a drug that they can use to prevent heatstroke.

“We were attempting to identify an intervention, something that could be used prophylactically to protect these sensitive individuals without significant side effects,” Dr. Hamilton said.

Other researchers believe that such a drug may also work for people without the RYR1 flaw.

In a report of news.com.au, Dr. Robert Dirksen, a professor of pharmacology at New York’s University of Rochester Medical Center said: “We think the fundamental process that occurs during heatstroke in individuals with RYR1 mutations is likely to be similar to what happens even in their (the mutations’) absence.”

“The difference may be that individuals with RYR1 mutations are more easily thrust into the process, whereas those without (the mutations) need to be pushed more – for example, by exposure to even greater temperatures or a long time, in order to move beyond a critical threshold.”