Hyaluron Swisscode Serum Side Effects & Safety. Do facial serums that contain hyaluronic acid work? And are they safe? Maybe they work, but there’s no evidence. And where safety is concerned, what researchers have found so far is that there are no major hazards associated with the use of hyaluronic acid serums — but there aren’t enough safety studies to say this for sure.

Doctors say they’re safe when used the way they’re supposed to be: to treat osteoarthritis and to replace eye fluid during eye operations. Still, they’re generally safe and allergic reactions are rare.

But women should know that doctors advise against the using hyaluronic acid when you’re pregnant and or breastfeeding.

The safety of hyaluronic acid when taken by mouth or applied to the skin during pregnancy is unknown, so doctors advise pregnant women to stay on the safe side and avoid use.

As for nursing mothers — don’t use hyaluronic acid, even by injection for osteoarthritis or other purposes. Researchers don’t know whether it can get into breast milk and what effect that might have on an infant.

Still, these warnings didn’t stop a facial serum based on hyaluronic acid from selling out just 48 hours after its launch last week.

Hyaluron, from beauty firm Swisscode, has been hailed as the ‘super serum’ alternative to minor cosmetic procedures and expensive facials and it sold out in the United Kingdom within 48 hours of its launch.

It’s supposed to be a hit with celebrities. “Jennifer Aniston and Courtney Cox are believed to be fans,” The Mail reports, “while Emma Thompson and Helen Mirren are said to be using the serum ahead of the Oscars.”

“Hyaluron instantly plumps the skin and leaves an admired dewy complexion — it’s the staple of my kit,” make-up artist Lou Page, who headed the teams at the Oscars last week, was said to reveal to the Mail.

Swisscode says its serum gives its users the benefits of dermal fillers — but without that too-plumped, ‘frozen’ look sometimes caused by Botox.

Hyaluron’s astounding success is put down to the fact that it promises to shave off at least five years of aging from the faces of those who use it — but there’s really no scientific evidence to back up this bold claim.

A spokesman for the brand reveals that the active ingredient is hyaluronic acid and Hyaluron offers the compound “in its purest form.” “Hylauron rebalances the proportion of mediators; these are very important for the regulation of the immune system,” he said.

The serum is supposed to work by penetrating into skin’s deepest layers, forming an invisible film on the surface and by doing so hydrating the skin layers and reducing environmental damage at the same time.

What exactly is hyaluronic acid?
And can it do what it’s touted to do?

Naturally present in the human body, hyaluronic acid is a complex, viscous fluid that lubricates joints and connective tissues and plays a role in the healing of wounds.

As a medication, it’s been approved the United States Food and Drug Administration for use in certain eye surgeries like the removal of corneas and their transplantation and the repair of detached retinas and other eye injuries. During eye operations, the acid is injected into the eye to help replace natural fluids.

It’s also been FDA-approved for various joint disorders, like osteoarthritis — either taken by mouth or injected into the affected joint. 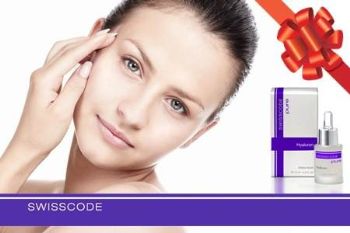 In damaged joints and tissues, hyaluronic acid works by acting as a cushion and lubricant. At the same time, it affects the way the body responds to injury and is believed to boost healing. This is why some people apply hyaluronic acid to wounds, burns and skin ulcers.

Super serum?
Hyaluronic acid has been hailed as the “fountain of youth” — and interest in it as an anti-aging compound has soared in recent years. But as we already mentioned earlier, there’s really no scientific proof that it can prevent the skin damage that come with aging.

That hasn’t stopped cosmetics manufacturers from marketing its so-called benefits and including it in various cosmetics. Apart from the new bestselling Hyaluron, it’s used in lesser-known moisturizers and as a lip filler in plastic surgery.

Scientists aren’t fully brushing aside the possibility that hyaluronic acid does have anti-aging properties — but they say categorically that “more evidence is needed to rate (the acid) for these uses.”

And while no known dangers have been linked with the use of hyaluronic acid — it doesn’t mean that there really aren’t any hazards. It simply means that at this point in time, the compound hasn’t been studied enough by scientists to find out if it’s safe and effective for use as an anti-aging agent.

The studies that have been conducted are those that show hyaluronic acid to be is safe and effective when used for osteoarthritis — as a prerequisite for FDA’s approval.

But even if the drug agency has given its nod to the acid as osteoarthritis treatment, not all people who use it report improvement in joint stiffness and pain. It’s not even known whether hyaluronic acid might delay or lessen progressive joint damage with long-term use is unknown.

It’s also been approved for use as replacement fluid during eye surgery, and doctors say it’s effective when applied as a gel for the treatment mouth sores.

Side effects and safety
So far, no drug interactions have been identified, and prescription forms of hyaluronic acid are known to be safe for most people when injected or used on the skin — but not when ingested.

Still, it’s relatively safe and allergic reactions are rare. Minor side effects include pain and redness where it’s injected and when used for eye surgery, it may increase eye pressure.

And for moms-to-be and nursing moms, it’s a no-no.