It’s a triple victory for public health advocates and environmentalists long pushing for bisphenol-A (BPA) to be taken out of food packaging in the United States.

The U.S. Food and Drug Administration is set to decide whether it will ban the toxic chemical BPA from all food packaging, prodded by a series of legal actions from environmental groups and a recent French move to ban the chemical in all food packaging. The agency’s decision is expected by March 31.

“Recent studies provide reason for some concern about the potential effects of BPA on the brain, behavior and prostate glands of fetuses, infants and children,” the FDA now says on its website – a sea change from its original position that the chemical was safe.

The FDA’s move comes just as Campbell’s Soup has announced its plans to look for a safer substitute for BPA-laden epoxy in the linings of its cans, following several studies that showed people who drank canned soup accumulated high levels of BPA.

At a shareholders meeting in February, Campbell’s Chief Financial Officer Craig Owens said his company had begun the shift to BPA-free cans but didn’t announce a specific timeline or any further details of its BPA-free commitment. He did say that the move wouldn’t impose significant costs on the company.

Last year, the advocacy group Breast Cancer Fund released a report that showed that Cambell’s Soup had among the highest BPA levels among a group of canned foods it had tested. American parents were particularly concerned because the products that were most appealing to children — soups and Spaghetti-O’s with fun shapes in them — were those that also ranked highest in the study.

Also in February, in an act Forbes hailed as a “gutsy move that put the health of Europeans ahead of big-business interests,” French lawmakers voted to ban the use of bisphenol-A in all food packaging.

The new French law, which will take effect on Jan. 1, 2014, is likely to lead to an European Union- wide ban that would make it financially untenable for U.S. food manufacturers that sell into Europe to continue using BPA, the financial daily also said.

Canada has declared BPA a toxin and banned the chemical’s use chemical in baby bottles since 2007, after studies showed that baby bottles warmed in microwaves were found to release BPA into infants’ milk. The EU, Turkey and other countries also banned BPA in baby bottles in 2008. Denmark has banned the toxic chemical in all baby food products, and in Japan, the entire canning industry has since replaced its BPA resin can liners.

While the U.S. still allows BPA in baby bottles, several states like Washington, New York, Maryland, Connecticut, Minnesota, Wisconsin and Vermont have enacted state-level regulations against it, and Colorado is also working on it, according to the World Health Organization.

Toxic but so common
Commonly used in food packaging, BPA is an industrial chemical that’s so ubiquitous it has been found in the urine of 93 percent of Americans. But it’s dangerous because it mimics the female hormone estrogen and is associated with health risks, including endocrine-related cancers.

Aside from reproductive problems, it’s been linked by many studies to problems in fetal brain development, prostate and other cancers, as well as heart disease. 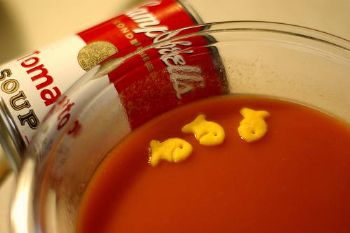 In October 2011, a study from the Harvard School of Public Health published in the journal Pediatrics, found a link between exposure to BPA during pregnancy and hyperactivity, depression, anxiety and other behavioral problem in preschool-age girls. The study showed that the higher the mothers’ BPA levels, the worse their daughters rated on standard behavior tests and the more likely the girls were to exhibit behavior problems as toddlers.

Earlier, in a groundbreaking study in 2007, the Environmental Working Group showed that BPA leached from epoxy linings of cans into surrounding food and drink. Its tests showed canned soup, pasta and infant formula had the highest BPA concentrations.

In a second study that year, the EWG also showed that one in 16 formula-fed babies were exposed to BPA levels that previous research showed were toxic to animals.

Because of these findings, the EWG has repeatedly called on the FDA to order the removal of BPA from food and beverage packaging, starting with infant formula.

In 2009, tests commissioned by EWG and Rachel’s Network also highlighted the sheer prevalence of BPA in the environment and in people in the U.S. For the first time, BPA was detected in the umbilical cord blood of nine out of 10 American newborns.

Until it made its pronouncement this March, the FDA had maintained that BPA doesn’t pose a health threat because it’s found in low levels in canned and packaged foods.

But many researchers and public health advocates have argued that because canned goods are popular, the average person ends up consuming a total BPA load that is higher than the tolerance levels set for any single product.

Other researchers have argued that the chemical has negative effects even at very low levels. Some scientists say the FDA’s average daily exposure estimates are way off. According to independent studies conducted by Consumer Reports in 2009, “consumers eating just one serving of canned vegetable soup we tested would get about double what the FDA now considers typical average dietary daily exposure.”

Consumer Reports said Progresso, Campbell’s, and Del Monte products were shown to have the highest BPA levels of all the products it tested.

But producers of canned food have been wary of taking BPA out of linings in cans because the chemical effectively helps the can withstand high heat during sterilization, prevents corrosion and increases the shelf life of the food product. Available alternatives are either less effective, more expensive, or both.