Can men be afflicted with breast cancer? Yes, they can. The incidence of breast cancer in men is very rare — in fact less than one percent of all breast cancers occur in men — but the disease is, to use the words of our friend Aleena, “not for women only”.

Men of all ages can be affected with breast cancer but, according to the National Cancer Institute, older men – those aged 60 years old and up – are more at risk. Other risk factors identified with the disease are: radiation exposure, exposure to female hormones (estrogen), and genetic factors.

Here are five men who were diagnosed with breast cancer.

Richard Roundtree, actor. American actor Richard Roundtree is probably the most visible face of male breast cancer these days. A 2001 USA Today reports that “he works passionately as a spokesman for both the Komen Foundation and a men’s health care initiative called Know Your Score”. Both groups seek to raise public awareness for male breast cancer as well as other kinds of cancer and are encouraging men to see their doctors regularly.

Richard was diagnosed with breast cancer in 1993 after he discovered a lump in his right breast and went straight to his doctor to find out what it is. He says in a USA Today interview:

When I got the news, I was shocked. I thought, ‘I couldn’t possibly have breast cancer. Men don’t get this.’ I’m a hypochondriac. As soon as I felt the lump I immediately went to my doctor. I don’t mess around that way.

Roundtree’s cancer was discovered early so he underwent chemotherapy, radiation treatments, and a mastectomy. It appears that he has been successful in beating the disease.

Ernie Green, American footballer. The former fullback for the Cleveland Browns in the National Football League was diagnosed with breast cancer in 2005 after he discovered a small lump in his chest. Interestingly, he had to seek a second opinion because his first doctor assured him that there’s nothing to worry about because “men don’t have the problem of breast cancer like women.” 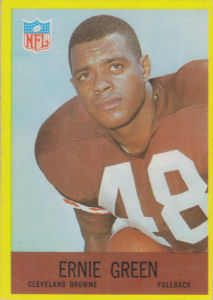 According to the Post Chronicle, Ernie “underwent a mastectomy in September 2005 and endured eight sessions of chemotherapy which ended in March 2006”. Like Richard above, he is now helping spread awareness about breast cancer among men.

Peter Criss, drummer/singer/rocker. Peter Criss, former drummer for the rock band Kiss, revealed in an interview with CNN that he was diagnosed with breast cancer in 2008.

A surgery removed the cancer so the rocker didn’t have to undergo chemotherapy. Like Richard and Ernie, Peter is now encouraging men to get themselves checked:

Here’s Peter in his interview with CNN where he talks being embarrassed with his diagnosis and why he decided to be the first man to say on television that he has breast cancer.

Robert Ray Roddy, announcer for The Price is Right. Rod “Come on down” Roddy was diagnosed with colon cancer in 2001 and with breast cancer in March 2003. These diagnoses encouraged Rod to be a spokesman for early cancer detection:

I could have prevented all this with a colonoscopy, and of course, that’s the campaign I’ve been on since I had the first surgery. To everybody out there, get a mammogram! It can happen to men, too.

He had surgery and underwent chemotherapy to get rid of the cancers but these did not succeed. He died 27 October 2003. He was 66 years old.

Edward Brooke, former U.S. Senator for Massachusetts. Edward Brooke, the first African-American to be elected to the U.S. Senate, was diagnosed with breast cancer in 2002. He says about his diagnosis in an interview with the New York Times:

When the doctor told me, all I could say was: ‘Me? Come on.’

He had a double mastectomy, is now cancer free, and is now encouraging men to perform self-examinations as well as for doctors to perform breast examinations on men more regularly.