Not only were they loved and hated with equal intensity when they were still alive — but both women died young of the same cause: cervical cancer.

She was loved by millions of Argentinian “descamisados” or “shirtless ones” — commoners, the poor and working class — mainly because of her fanatical devotion to charity work.

But Peron was despised by many upper-class Argentinians, who snubbed her for being an illegitimate child and for using her looks and charms to gain power. 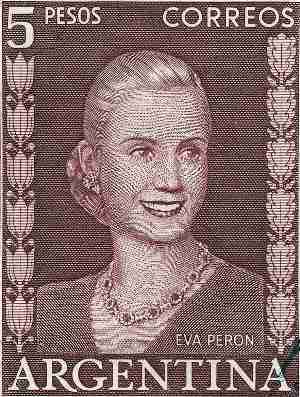 Goody’s fame, meanwhile, is of a lesser shine, even bordering on simple notoriety. Accused of racist bullying against an Indian “Big Brother” housemate, she was also ridiculed in British tabloids for displaying a severe lack of general knowledge for a British native. But she rose to riches after becoming famous on — then kicked out of — the popular reality TV show and going on to open her own brands.

And while their deaths occurred 57 years apart — both brought much-needed attention to cervical cancer. Peron died at the age of 33; Goody died at 27.

But dying young from cervical cancer is actually pretty rare. Only about a tenth of women who get cervical cancer die before the age of 35. Death from this cancer is more likely to occur the older a woman gets.

Globally, the death rate is quite high — 50 percent — but the incidence of cervical cancer has dropped steadily and steeply in the United States and in most developed countries over the past 50 years. Both the incidence and death rates have dropped by 75 percent in most developed countries (although it’s the second most common cause of cancer deaths in developing nations).

This is because cervical cancer is preventable and can be cured when it’s found early — and it’s usually found very early with a simple Pap test. Screening programs in rich countries, too, have also advanced in recent years and are widely accessible.

Cervical cancer is caused by a virus called the human papillomavirus or HPV, that’s mostly sexually transmitted. There are many types of the HPV virus and not all cause cervical cancer. Some HPVs can be spread by touch — and these are not dangerous and often don’t cause any symptoms. Some cause genital warts, and there are a few that are downright dangerous and cancer-causing.

Because HPV can remain undetected in the body for years, it’s important to have regular a Pap test — or lab exams of cells scraped from your cervix. This test can find changes in cervical cells before they turn into cancer. Treating these cell changes can help prevent cervical cancer.

Most of the 12,000 new cases and 4,200 deaths from cervical cancer that occur each year in the U.S. occur in women who have never been screened or haven’t been screened in the past five years.

Now, a controversial new study suggests that black women’s bodies have more trouble clearing the HPV virus. This is why black women are much more likely than white women to develop and die from this type of cancer.

Black women of the world — go get yourself inoculated with an HPV vaccine!
If further research confirms the findings, it would make it even more important for black women to get the HPV vaccine, says Dr. Worta McCaskill-Stevens, a prevention specialist at the National Cancer Institute. The study was presented on April 2 at an American Association for Cancer Research conference in Chicago.

Compared to white women, black women are 40 percent more likely to develop cervical cancer and twice as likely to die from it. And for a long time, doctors thought that was caused by less access to screening and follow-up health care.

But the new study carried out by researchers from the University of South Carolina in Columbia involving young college women suggests that there might be a biological explanation for the racial disparity, too. The U.S. National Institute on Minority Health and Health Disparities sponsored the study.

How did the researchers find this out?
First, they studied 326 white and 113 black students taking part in a wider federal health study. All study participants were sexually active and all were given Pap tests and HPV tests every six months throughout their years in school.

Brief infections with HPV are very common in young women, but they usually clear or go away on their own within a year or so. HPV only poses a cancer risk when they last for a long time and only certain strains of HPV go on to become cervical cancer.

The researchers found that while both groups of women had similar new HPV infections and even risk factors — such as how many sex partners they had — doctors saw striking differences in how long their infections lasted.

At any checkup, black women were 1.5 times more likely to test positive for infection with one of the HPV strains that raise cancer risk at any checkup, says study leader Dr. Kim Creek. “The African American women weren’t clearing the virus as fast. They were actually holding on to it about six months longer,” for 18 months versus 12 months for whites, he says.

“The reason for slower clearance of high-risk HPV infection in African-American participants is unknown and is actively being studied.”

Dr. Creek is a paid speaker for Merck & Co., one of the makers of HPV vaccines. But side by side with this disclosure, is the fact that cervical cancer has truly declined dramatically in the U.S. — and in most developed countries — because more women are getting Pap tests and HPV vaccines.

Pap tests are recommended every three years for women 21 to 65 years old. Starting at age 30, women can also have an HPV test every five years — they’re not recommended before then because brief infections are so common, they would give too many false alarms.

“We have known there are genetic differences between the races,” and it’s possible that a gene from certain ancestries such as African might play a role in the ability to clear an HPV infection, says Dr. McCaskill-Stevens of the Cancer Institute. But she warns that the new findings are “provocative” and need validation in a study that looks beyond this one region.

Can you prevent yourself from getting cervical cancer
Yes, you can, and here are some ways.

Vaccination
Two vaccines — Gardasil and Cervarix — have been approved by the U.S. Food and Drug Administration as highly effective in preventing persistent infections with the two human papillomavirus (HPV) types that cause most cervical and cervical cancers. Gardasil also protects against two types of HPV that cause genital warts.

If you are age 26 or younger, you can get the HPV shot. Three shots are given over six months, and the series of shots is recommended for girls age 11 or 12 and can be given to females ages nine to 26.

Treat HPV infections
Right now, there’s no medical treatment for HPV infections, but the lesions and warts that can result from such infections can be treated. Cervical lesions can be treated with:
• Cryosurgery — freezing that destroys tissue
• LEEP — loop electrosurgical excision procedure or the removal of tissue using a hot wire loop
• Conization — surgery to remove a cone-shaped piece of tissue from the cervix and cervical canal
Similar treatments may be used for external genital warts and some drugs are get rid of external genital warts.

Practice safer sex
The risk of being infected with HPV is strongly linked to having many sexual partners over a lifetime. This is why the surest way to get rid of the risk for genital HPV infection is to refrain from any genital contact with another person.

Studies have shown that correct and consistent condom use can reduce the transmission of HPV between sexual partners. Keep in mind, though, that condoms can’t protect completely because they don’t cover every possible HPV-infected area of the body — the genital or cervical area. Condoms also protect against HIV, which lowers the immunity to HPV infections and hastens their development into cervical cancer.