Are Phosphate Enemas Safe for Old People? Do you have an oldster in your life? A granny or grandpa maybe? An elderly aunt? If so, take note. Like any person who lived through the Depression and World War II era, your grandma or grandpa believes in enemas in the same way that he or she swears by drinking cod liver oil.

For some oldsters, the enema habit, begun in childhood by parents who meant well but were ill advised, is well entrenched by the time they reach old age.

But new findings suggest that older people who use sodium phosphate enemas to relieve constipation may suffer kidney failure — or even die.

Enemas relieve constipation by softening the stool with water drawn into a person’s gut, allowing it to pass more easily.

But in a group of 11 elderly patients, whose ages ranged from 61 to 89 years old, the use of enemas containing sodium phosphate prompted their kidneys to shut down, instead.

According Dr. Yaacov Ori and his colleagues at the Rabin Medical Center in Petah-Tikva, Israel, within one day of using the enema, the blood pressure and calcium levels of most patients plummeted, while the phosphate levels in their blood rose.

Five of the patients died and three of the surviving six required prolonged hospital stays, the authors reported. Seven of the patients, though, had some trouble with their kidneys even before using the enema — but then, most old people do.

Ten patients had used the enema for constipation, and the remaining one used an enema to prepare for a proctoscopy procedure. Most of the patients received the standard 250 ml dose.

When they’re functioning normally, the kidneys remove excess salt from the bodily systems, explains Dr. Markus Bitzer, a nephrologist at the University of Michigan. But because many elderly people suffer from chronic kidney disease and don’t drink enough fluids, the kidneys become overwhelmed, he tells Reuters Health.

“The kidney tries to eliminate the salt, but what happens is the salt in the kidney system becomes concentrated,” said Dr. Bitzer. “Over a few days or weeks it can cause the formation of crystals, and they then cause renal failure,” he added.

Once the sodium phosphate is absorbed into a person’s body, “it overwhelms the system, and the kidneys can’t deal with this quantity,” Dr. Ori told Reuters Health in an email.

All these have led Dr. Ori and his colleagues to conclude in their paper: “Sodium phosphate enemas, even in standard doses, may lead to severe metabolic disorders associated with a high mortality and morbidity. Their use should be limited to low-risk patients only.”

“Their use should be limited to low-risk patients only,” the authors say of sodium phosphate enemas in a report of their study, published in the Archives of Internal Medicine.

But according to Dr. Bitzer, concerns over sodium phosphate enemas existed for the past 20 years. Since the 1990s, people have been aware of the possible problems that enemas could cause kidneys.

This is why a few years ago the University of Michigan stopped using the mixture in enemas for their patients, he said. Instead, patients were given a mixture created by the university pharmacists from a special soap or sugar.

Fleet, the company that licensed the enemas used by the patients in the new report, said that Dexxon Ltd. manufactured and sold the products in Israel. In a statement, it said it was “evaluating the study, contacting the authors of the study, communicating with Dexxon, and communicating with the appropriate regulatory authorities.”

Meanwhile, for people who are constipated, doctors recommend a change in diet, rather than an enema. 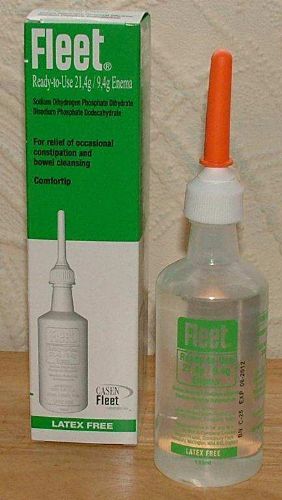 Enemas for bet-wetting
An earlier study from the Wake Forest University in Winston-Salem, North Carolina, for its part, reported one good thing about laxatives.

Laxatives can help many children experiencing bed-wetting, the researchers said.

Occult megarectum, or constipation, is a commonly overlooked cause of nocturnal enuresis, according to Dr. Steve Hodges and coauthor Dr. Evelyn Anthony from that university’s Department of Radiology. This can be treated with laxatives.

In their study of 30 children and adolescents seeking treatment for bed-wetting, the two doctors found large amounts of stool in the children’s rectums, even among those who reported having normal bowel habits. The study participants had ages ranging from five to 15 years old.

The report, published online December 14, 2011 in Urology, showed that three months of laxative therapy cured 25 patients (or 83 percent) of their bed-wetting.

According to the authors, stool retention reduces bladder capacity and leads possibly to bladder overactivity. This is why many therapies aimed at the bladder, such as fluid restriction or alarms, may be ineffective, they explain.

The findings of this new study support that of a landmark research done more than 25 years ago, which showed that constipation was a commonly unrecognized cause of enuresis. In the earlier study, investigators found that undiagnosed megarectum underlies many cases of bed-wetting, and that laxative treatment may be a cure. But those findings did little to change practice.

In the new study, initial therapy involved cleaning out the bowel with a polyethylene glycol 3350 laxative (PEG), followed by a daily maintenance dose “titrated to keep the stools the consistency of a milk shake,” the authors write. Follow-up imaging was done at one and three months, and if this showed persistent constipation, daily enemas or stimulant laxatives were added to the PEG regimen.

All four adolescents and 80 percent of the younger children in the study were cured of their enuresis by these methods.

Dr. Hodges acknowledged that his study was not as rigorous as could be: since some of the cases may have improved over time on their own, the effectivity of laxative therapy can be best tested by a randomized trial assigning some constipated children to the therapy and others to an inactive therapy.

Any medical therapy for bed-wetting should be done under the supervision of a physician, he cautioned.