Pink Slime in Ground Beef: Safety, Health Risk, Bad Side Effects? Americans are just about up in arms over ‘pink slime,’ livid over the fact that the unappetizing industrial sludge of cow connective tissue and low-grade beef scraps treated with ammonium hydroxide has quietly found its way into 70 percent of supermarket beef — and even school lunches across the nation.

Anger over pink slime in ground beef has dominated the news for the past week. On March 6, “The Lunch Tray” blogger, Bettina Elias Siegel, started a petition to remove pink slime from school food. As of Tuesday, almost 200,000 people had signed. Siegel plans to present the petition to the United States Department of Agriculture.

Environmentalists, bloggers and health writers alike point out that McDonald’s isn’t known for its healthy and wholesome foods but it’s stopped adding ‘pink slime’ into its hamburgers since August 2011. Of course, the move was influenced by a campaign led by celebrity chef Jamie Oliver, but other multinational burger chains like Burger King and Taco Bell have also stopped using it.

In 70% of supermarket beef, school lunches
But on March 6, an “ABC World News” article from Jim Avila shocked Americans when it reported that 70 percent of ground beef sold in U.S. supermarkets contains the ammonia-treated product.

Avila claims he was tipped off to the startling figure by a whistleblower at the USDA — who says he has quit his job out of disgust with the product.

Worse, while these ground-up tissues and scraps were previously used for only dog food, they’ve now quietly found their way into the nation’s ground beef supply since the 1990s. The U.S. Department of Agriculture plans to buy seven million pounds (3.2 million kg) of it for use in school lunches to feed the country’s kids over the coming year.

Pink slime in ground beef was born out of a meat company’s clever plan to make money out of otherwise unusable beef parts, the New York Times reveals in a series of exposes in 2009. Faced with a glut of fat, connective tissue and other slaughterhouse trimmings, the founder of Beef Products Inc. developed a process that turned the largely unsellable remnants into hamburger fillers. Aside from its creator Beef Products Inc., ‘pink slime’ is also sold by Cargill Meat Solutions.

The trimmings are first put through a centrifuge to separate their fat and meat, then squeezed through a pencil-thin tube.

But because these trimmings are more prone to contamination with E. coli and salmonella, the trimmings are exposed to ammonia gas as these are being squeezed through the tube. This raises the meat’s pH and kills pathogens — but is also the crux of the ongoing controversy. That, and the fact that consumers aren’t informed through proper labeling.

Using ammonia gas to process food products this way is approved by the U.S.D.A. And yet the term ‘pink slime’ itself was coined by one of two whistle-blowing former U.S.D.A. scientists who are now campaigning against the unlabeled inclusion of the burger filler products in school lunches and supermarket ground beef.

Ammonium hydroxide has long been used as an antimicrobial additive in food, the D.A., says. In fact, the Food and Drug Administration classes ammonium hydroxide as a food additive that’s generally recognized as safe.

The USDA also released a statement claiming that its purchases of ground beef meet “the highest standards for food safety.” According to the agency, it only allows products into commerce that it’s sure are safe.

“USDA has strengthened ground beef food safety standards in recent years and only allows products into commerce that we have confidence are safe.”

Writing in the New York Times blog Motherlode, leading blogger KJ Dell’Antonia quipped, “Pink Slime: it’s tasty (well, probably not), nutritious (oops, not that either) and cheap (got that right) and it’s probably found in a hamburger near you. Most particularly, in the hamburger or cheeseburger that almost certainly graced the lunch menu at your child’s school this month.” 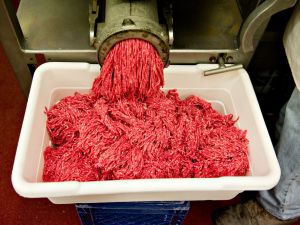 “It improves the nutritional profile, increases the safety of the products and meets the budget parameters that allow the school lunch program to feed kids nationwide every day.”

The American Meat Institute (AMI) also issued a statement through Food Safety News supporting ‘pink slime.’ AMI said ‘pink slime’ is “beef” that’s “absolutely edible.” It said BPI “simply removes fat and makes the remaining beef more lean and suited to a variety of beef products that satisfy consumers’ desire for leaner foods.” It also claimed that ‘pink slime’ is “a sustainable product because it recovers lean meat that would otherwise be wasted.”

Finally, it said, “The beef industry is proud to efficiently produce as much lean meat as possible from the cattle we raise. It’s the right thing to do and it ensures that our products remain as affordable as we can make them while helping to feed America and the world.”

Former U.S.D.A. microbiologist Zirnstein disagrees. “Not only is this product a potential source of killer pathogens if the ammonia levels aren’t controlled properly, but that the overall protein quality of the beef hamburger is compromised by the inclusion of LFTB,” he tells Fox News.

More tellingly, BPI’s former director of food safety for, Kit Foshee, claims that the company’s CEO had routinely told fast-food companies that the inclusion of treated beef would help kill pathogens when mixed with other ground beef.

“BPI is marketing themselves as a pinnacle of safety,” Foshee said. “It’s all lies. It’s all marketing.”

According to Motherlode blogger, Beef Products has even lobbied with the U.S.D.A. to take ammonia out from the list of ingredient, then lobbied to have the filler labeled as “meat.”

“Maybe the use of the trimmings, ammonia and all, is just fine,” she says, quoting another writer, Rob Lyons of the Huffington Post as saying: “Getting every last bit of meat off a carcass is a good thing, given the cost of rearing a cow. Butchers and meat processors are proud of the fact that they use everything but the moo.”

But she says Americans should question whether or not their families sometimes consume too many chemicals from what they eat or drink. What’s worse, she says, the additive isn’t even required to be mentioned on ground beef labels when “food ingredients — many with long chemical names — are required to be listed on food labels.”

Meanwhile, Heather Travis, the director of public relations for Canada Beef rushed to assure Canadian consumers that ‘pink slime’ and ammonium hydroxide aren’t used in ground beef in that country.

“In Canada we do not use ammonia in ground beef to kill e.coli 0157:H7, it has not been approved for use in packing plants by Health Canada,” Travis wrote in an email to Canadian news site The Province.

“Source ground beef is ground from a piece of beef, like a sirloin steak,” she wrote. “Canadian legislation does require that imported meat products meet the same standards and requirements as if they were produced in registered establishments in Canada.”

Ammonium salts are approved for use in some foods by health regulators across the world and ammonium hydroxide is endorsed for many foods by the World Health Organization.

Pink Slime in Food
Is Wood Pulp in Food Safe to Eat?