What Causes Cryptorchidism? Painkillers During Pregnancy? What is cryptorchidism and what causes it? Cryptorchidism is the absence of one or both testes from the scrotum because of its/their failure to “descend”.

What causes this disorder is yet to be established but some European researchers are now suggesting that painkillers — paracetamol, aspirin and ibuprofen — taken by mothers during their pregnancy may be a contributing factor.

In a study published in the Human Reproduction journal, the researchers – led by Henrik Leffers of Copenhagen’s Righospitalet – found that women who took a combination of more than one mild painkillers during their pregnancy had an increased risk of giving birth to sons with undescended testicles.

Combining one or more mild painkillers like paracetamol, aspirin and ibuprofen during pregnancy may increase the risk of the baby to develop cryptorchidism, the researchers say.

During the study, researchers interviewed 834 women in Denmark and 1, 463 women in Finland who were asked about their use of medication during pregnancy.

Their babies were also examined at birth for any signs of cryptorchidism.

Cryptorchidism is a risk factor for poor semen quality and a greater risk of testicular cancer in the baby’s later life. 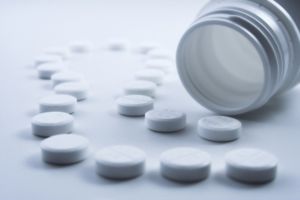 Says Dr. Leffers about the implications of their study: “Women may want to try to reduce their analgesic use during pregnancy. However, as biologists this is not something we can advise women about. So we recommend that pregnant women seek advice from their physician.”

For male fertility related stories, check out our post about healthy sperm cells, sperm count and sunbathing, and postpartum depression among new fathers.

How prevalent is cryptorchidism worldwide? Apparently, it is more common that you think when the boys are still babies. In fact, according to wikipedia “about 3% of full-term and 30% of premature infant boys are born with at least one undescended testis.”

However, as the babies grow older, their cryptorchid testes eventually descend, with 8 in ten reporting normalized tested by the first year. Wikipedia states that the true incidence of cryptorchidism is around 1% overall.