Healthy Sperm Cells: Omega 3 Good, Saturated Fat Bad. In an earlier post, we mentioned a study which concludes that you can increase your sperm count by sunning yourself. Now here’s another study which suggests that avoiding food with saturated fat and consuming fish products rich in Omega 3 will likely result in healthier sperm cells.

Check out the story below.

How do men improve their fertility (sperm count)? For starters, you should avoid food with saturated fat like, you know, bacon, sausages and ham, dairy and butter. And you should have more food rich in healthy fats such as fish.

According to a recent study from Harvard Medical School, guys who eat a large amount of saturated fat and monounsaturated fat are more likely to have a lower sperm count while those whose diet is reach in healthy fat – like omega 3 and omega 6 – have healthier and more active sperm.

Says researcher Dr Jill Attaman: “We were able to demonstrate that in men who took in higher amounts of fats, such as saturated fat and monounsaturated fat, there was an association with decreased sperm concentration. But polyunsaturated fat – those seen in fish primarily – was associated with improved sperm morphology and motility.” 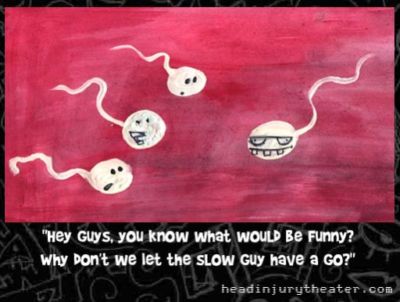 The Daily Mail reports on how the research was conducted and its results:

The research was carried out on 91 men seeking fertility treatment but Dr Attaman said she would expect to see a ‘similar pattern’ in the general population, although this would need to be studied.

The men were asked how often they ate certain foods, what types of oil they used in cooking and baking and the types of margarine they consumed.

Of the group, 21 men also had levels of fatty acids in their sperm and semen measured.

Overall, those men in the highest saturated fat intake group took in 13 per cent of their daily calories as saturated fat, while those in the lowest third took in 8 per cent.

The research findings were presented at the American Society for Reproductive Medicine conference held recently in Denver.

*****
For more male health related entries, check out how to increase your libido, post partum depression among fathers, and breast cancer among men.