Stem Cell Treatment for Cerebral Palsy: Dalton Rogers-Ford Story. Can stem cell therapy cure cerebral palsy? A news report by the Journal Standard, an Illinois community paper, on the case of 4-year-old Dalton Rogers-Ford shows that it does.

Dalton, accompanied by his mom and two grandmothers, traveled to Germany last September to undergo stem cell procedure which lasted for two days.

He is now back in Pearl City, Illinois and according to his mom Nikki, “He keeps improving more and more every day.”

Diagnosed with Periventricular (a form of cerebral palsy) when he was 18 months old Dalton is now standing with assistance and taking more steps on his own. 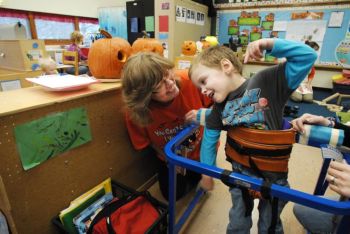 Here are some comments about Dalton’s progress from people close to him following his stem cell treatment in Germany.

Teacher Judy Robinson (second grade pre-school, Pearl City Elementary School): “Dalton has made great strides. He is beginning to communicate and can now form a short sentence. Since he has been back, he now says hi to the staff and the only time he gets agitated is when another child cries — he’s very empathetic.”

Teaching Aide Karen Krogull: “It’s exciting to see the results in Dalton — I find it an honor and a privilege to work with him each day.”

Want to read more about stem cell treatments in Germany?

Go check out our post on the story of Jona Ghelli who had stem cell therapy at the XCell Center. Like Dalton, she was also treated for cerebral palsy as well as microcephaly.

According to her mom, Jona’s condition improved — she started to talk and communicate — after her treatment procedure.