Natural-Looking Hair Transplant With Leg Hair? If you’re a man who’s lost all your hair but would give anything to get them back, here’s good news for you. You may know that traditional hair restoration surgery — which works by transplanting hair follicles from the back of the head to the front — wouldn’t work if you have few hair follicles left, or none at all.

But did you know that your legs could offer a good supply?

That’s exactly what Dr. Sanusi Umar, a clinical instructor in dermatology at the University of California, Los Angeles, says he’s proven. Writing in the February issue of the Archives of Dermatology, he says men’s legs may be the new source for hair transplants.

“The whole idea is to take hair transplantation to the next level,” says Dr. Umar, who also runs his own practice in Redondo Beach, California.

In his report, Dr. Umar writes about two successful transplants he’s conducted using the new procedure he’s developed of taking hair follicles from his patients’ legs and grafting them to the heads to restore receding hairlines. 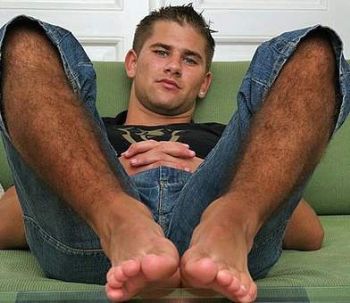 Previously, men’s leg hair has been successfully transplanted to the back of the head, but Dr. Umar’s work make up the first documented cases of leg hair being used to restore the hairline.

According to him, the new procedure can do a better job of restoring the hairlines of millions of men with male pattern baldness or androgenic alopecia. The condition is caused by sensitivity to the effects of hormones on hair follicles that’s mainly inherited. Usually beginning at the hairline, it eventually leads to a horseshoe-shaped pattern of hair formed around the ears.

No sources for follicles
“People bald or thin to varying degrees,” Dr. Umar notes. “You can have mild baldness or it can be very severe.” But this means that the standard hair transplantation surgery won’t work in a man who has lost most of his head hair and has therefore no source for the transplant.

“You’re fighting a losing battle because there’s just not enough to work with. Most ethical practices will therefore tell a very bald (man) that they cannot do it because it will not look natural,” Dr. Umar says. This is where leg hair can help, he says.

More natural-looking hairlines
Another reason that the new procedure is better than traditional hair transplantation surgery is that using leg hair can actually bring better- or natural-looking results.

Unknown to many, traditional hair restoration surgery can result in ugly hairlines, since the hairs used to replace the ones lost from the hairline are often coarser than the original hairs.

Dermatologists call the area that runs an inch or two above the ears and temples until the back of the head the safe donor zone because hair follicles there are resistant to the hormones that cause hair loss.

The result is that men who’ve had hair transplants often find their hairlines looking abrupt-, stern- or unnatural-looking.

“Traditional transplant takes hair from the middle of the back of the head, and that hair happens to be the thickest hair on the head,” Dr. Umar explains. That means that “if you take it from there and put it in the hairline, despite your best efforts, it will end up slightly harsh (-looking) and unnatural in the hairline. It’s problematic to say the least,” he reveals.

But according to Dr. Umar, the hairs found on the leg are finer and softer — and are thus ideal candidates for hair grafts aimed to recreate the hairline.