Does Alcohol Cause or Reduce Stroke: Study of Women Drinkers. Strokes are a women’s issue. For a long time, we’ve thought of them as men’s diseases — but women are actually at a greater risk of suffering major disabilities from strokes. Worse, they are more likely than men to die from one. Strokes kill more women than men: Each year, three million women across the world die from strokes. The death rate for women from stroke is twice that of breast cancer.

In the United States, more than 425,000 women suffer a stroke each year — about 55,000 more strokes than men suffer, according to the National Stroke Association.

Previous research has consistently associated light-to-moderate alcohol consumption with lower risk of heart disease, but data for stroke are less certain. Now, a new study suggests that women can reduce their risk for stroke by drinking alcohol — but only moderately.

Up to one drink a day may lower women’s risk of stroke, according to a new analysis of 84,000 women enrolled in a major, ongoing 26-year investigation of factors that influence women’s health.

The new analysis, conducted by researchers from the Harvard School of Public Health and its affiliate teaching hospital, the Brigham and Women’s Hospital in Boston, Massachusetts, is published in the March 8 online issue of Stroke, a journal of the American Heart Association (AHA). It was funded by the National Heart, Lung and Blood Institute.

The findings are in line with current national health guidelines for women on alcohol consumption, which suggest a modest reduction in stroke risk for women who drink less than one drink per day. The AHA recommends no more than one to two drinks a day for men, and one a day for women. And what exactly does one drink mean? It means: one 12 oz. beer, one 4 oz. glass of wine, 1.5 oz. shot of 80-proof spirits, or 1 oz. shot of 100-proof spirits.

But the researchers are careful to point out that their study doesn’t suggest that women who don’t drink should begin doing so.

“We certainly don’t want to advocate initiation of alcohol consumption for those who are non-drinkers,” study author Dr. Monik Jimenez, an epidemiologist at Brigham and Women’s Hospital, tells the National Public Radio. Women who don’t drink already have a fairly low stroke risk to begin with, he explains.

The researchers are also careful to point out that their study shows an association — and not a cause-and-effect link. Another limitation of their study, too, is that researchers relied on the participants to report their own alcohol consumption.

What the researchers did
Researchers reanalyzed data on nearly 84,000 women who had been enrolled in the National Institutes of Health-funded Nurses’ Health Study — the largest and longest running investigation of factors that influence women’s health. That study had asked participants to provide information about their lifestyle habits, daily diets and alcohol consumption. All the women had no evidence of cancer and heart disease when the study started.

Scouring the data, the researchers found:
• Almost 30 percent of women reported that they never drank alcohol
• 35 percent reported drank very little
• 37 percent drank moderately
• Only 11 percent of women reported drinking more than the equivalent of one mixed drink per day on average.
Analyzing the data, they found:
• 2,171 incidents of strokes
• Of the 25,000 women who drank no alcohol, 1,045 suffered a stroke
• Among the 29,000 women who drank lightly, 552 had a stroke
• Of the 20,000 who drank moderately, 341 had a stroke

Subjecting the data to statistical analysis, the researchers concluded that women who drank low to moderate amounts of alcohol had a lower stroke risk than women who never drank. 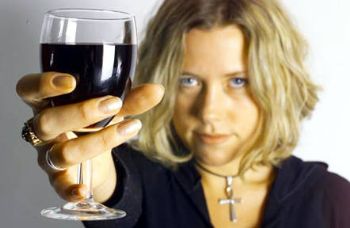 Heavy drinkers get a higher risk
But this study doesn’t give a reliable picture of risk for women who drink heavily, because there were so few heavy drinkers. It did show that heavy drinkers were no less likely to suffer a stroke — indeed, and earlier studies have found that heavier drinking is linked to more strokes.

Excessive drinking can also raise the levels of triglycerides or some fats in the blood. It can also lead to an increased calorie intake — and consuming too many calories can cause obesity and raises the risk of developing diabetes.

It’s also been long known that heavy drinking also raises the risk for liver disease, cancer, and other potentially deadly illnesses — as well as for relationship problems, depression and car accidents.

The findings also back up a September 2011 study that tracked 14,000 from middle age (average age 58) to old age (average age 70). The researchers, who also mined the same Nurses’ Health Study data used by the more recent study, found that women who had five to seven drinks a week were 20 percent more likely to “age successfully” than nondrinkers.

The researchers defined “successful aging” as being free of heart disease, major chronic diseases and major mental or physical impairment. They concluded that women who consumed alcohol “at regular patterns throughout the week, rather than on a single occasion, had somewhat better odds of successful ageing.”

The study was also from the Harvard School of Public Health and its affiliate hospital, Brigham, but was done by a different set of researchers.

Apart from advising moderation where alcoholic consumption is concerned, the AHA also says the following people should NOT consume any alcohol:
• Anyone with heart failure and uncontrolled hypertension, high blood fats, pancreatitis, liver disease, certain blood disorders or those with a personal or family history of alcoholism
• Pregnant women
• People on certain medications that interact with alcohol

If you’re one of these people, or simply aren’t into drinking alcohol, take heart. Taking up a glass of wine at night isn’t the only way women can reduce their risk of stroke.

A recent study led by a nutrition professor at the University of East Anglia’s Norwich Medical School in the United Kingdom — which again mined the same Nurses’ Health Study data — found that women can reduce their risk of stroke by eating more citrus fruits like oranges and grapefruit. Citrus fruits contain flavonoids — compounds that improve blood vessel function and reduce inflammation.

Does Alcohol Cause or Reduce Stroke: Study of Women Drinkers. Posted 16 March 2012.