Marijuana Soda: Canna Cola or Doc Weed? Some “hipster” named Clay Butler is reportedly planning to sell soda laced with marijuana aimed for consumers who need it for medical purposes. Here are some questions you might be asking about marijuana soda.

The answers are culled from newspaper reports on the subject.

Where can you buy marijuana soda?
The producers are initially targeting the marijuana-friendly state of Colorado so you may have to go to the Centennial State to buy them.

According to NBC Bay Area, the soda is scheduled to begin selling in Colorado in February. The manufacturers also have a tentative plan to sell the “beverage” in California sometime in spring.

What will the soda taste like?
Mercury News reports that “the line includes the flagship cola drink Canna Cola, the Dr Pepper-like Doc Weed, the lemon-lime Sour Diesel, the grape-flavored Grape Ape and the orange-flavored Orange Kush”.

How much THC will the soda contain? [Note: THC or Tetrahydrocannabinol is the psychoactive ingredient in marijuana.]
The THC dosage will be “somewhere between 35 to 65 milligrams” according to Scott Riddell. According to Mercury News, Mr. Riddell is the founder of Diavolo Brands, which is marketing Canna Cola. Mr. Riddell claims that levels of THC in his product “will be substantially below the levels of many drinks now on the market”. 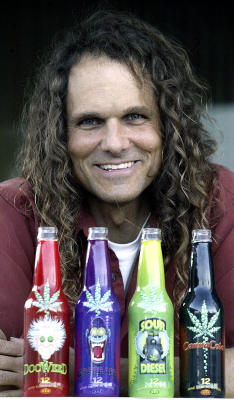 How expensive is the marijuana soda?
Those planning to buy a 12-ounce bottle should be ready to shell out anywhere between $10 and $15.

Is Clay Butler, the man behind this push to popularize marijuana soda, really a hipster?
He may look like one with them long curly hair and all but we’d like to think of him as more of a businessman.

Here’s what he says about himself: “I don’t do drugs. Never have. I never drank, never smoked. I’m a clean-living guy. I’ve had two beers in my whole life, and I remember them both too. No marijuana, I’ve never smoked a cigarette. I take an aspirin when I get a headache. That’s it.”

He adds: “Even though, personally, I’m not interested and I don’t think it’s right for me,” said Butler, “I’m a firm believer that adults have an inalienable right to think, eat, smoke, drink, ingest, decorate, dress any way they choose to do so. It’s your life; it’s your body.”

We hope this blog post answers some questions you may have been wondering about. It’s not clear yet anyone can buy a bottle of marijuana soda or whether one needs a doctor’s prescription before you are allowed to buy a Canna Cola.

Question of the day: Can marijuana be classified as an alternative medicine?

Alternative medicine “enthusiasts” might want to check out our blog posts on the matter such as whether electrocution is the best acne treatment, this German university research which proved that acupuncture does kill pain, and the use of yoga to treat fibromyalgia pain.