Weight Loss Tips: Turn Off the Lights When You Sleep. To lose weight, you do not just trim down eat less or reduce your calorie intake. A new study suggests that you should also turn off the lights at night.

The study, which was published online in the journal Proceedings of the National Academy of Sciences, focused on how prolonged computer use and television viewing at night associated with lack of physical activity add risks for obesity.

The Telegraph reports on this study:

Researchers found mice exposed to a relatively dim light at night over eight weeks had gained a third more weight than those in a standard light-dark cycle.

Laura Fonken,a neuroscientist at Ohio State University, said: “Although there were no differences in activity levels or daily consumption of food, the mice that lived with light at night were getting fatter than the others.”

According to study co-author Prof. Randy Nelson, people who use computer and watch TV a lot at night may be eating at the “wrong” time, disrupting their metabolism. 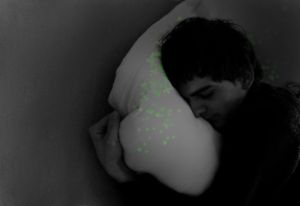 The researchers found that staying up later at night can lead to eating more food. At night, metabolism slows down.

Tam Fry of the National Obesity Forum said they had been advising people for early dinner to trim down their weight.

He said having a late time for dinner would allow the food to sit for the rest of the night.

The study also found that shift workers are more prone to heart disease and diabetes.

For our other posts related to weight issues, check out the Nip+Fab Tummy Fix, the effectiveness (or ineffectiveness) of Slimming Beauty Bitter Orange Slimming Capsules, and the risks/benefits of weight loss surgery for teens.

Weight Loss Tips: Turn Off the Lights When You Sleep. Posted 22 October 2010.