So there you are savoring the creamy deliciousness of your bowl of ice cream. You take a little scoop and carefully lift it from the bowl to your mouth. Then another scoop. Then another. “Mmmmm. Yum, yum,” you say. “This is the best way to beat the summer heat.”

But days later, you develop a fever and a throbbing headache. So you ask your husband to drive you to the hospital. Good thing he did. The hospital folks discover that you are infected with a bacteria called Listeria monocytogenes. With their help, you eventually trace the damn bacteria to the delicious ice cream you’ve been eating.

You survived the health scare but are still left wondering about the impact of the ice cream listeria infection on your pregnancy. Did the bad bacteria infect your baby or is he safe in his womb sanctuary? Will you carry him to term? You can’t help asking these and similar questions.

Ice cream listeria infections are hogging the media headlines these days following a recall by Blue Bell Creameries of its ice cream products because of listeria contamination which led to the death of three patients. 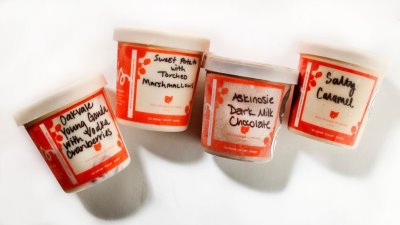 The Kansas Department of Health has some details:

The Kansas Department of Health and Environment (KDHE) has been working with the Centers for Disease Control and Prevention (CDC), the U.S. Food and Drug Administration (FDA) and the Texas Department of State Health Services (DSHS) to investigate an outbreak of listeriosis cases in five adult Kansas residents linked to ice cream consumed from Blue Bell Creameries. Listeriosis is a serious infection usually caused by eating food contaminated with the bacterium Listeria monocytogenes.

Five people in Kansas have become ill as part of this outbreak and three deaths have been reported. Patients became ill with listeriosis after hospitalizations for unrelated causes at the same hospital. They became ill between January 2014 and January 2015 after a majority were known to have consumed Blue Bell Creameries ice cream at the hospital.

So what’s the listeria bacteria doing in your ice cream? Apparently, Listeria monocytogenes likes cold places. Says Dr. Robert Tauxe who retired from the CDC, “It likes places that are cold and wet and where there is something it can grow on. Unfortunately, food factories with good refrigeration systems are a place Listeria is known to hang out. It takes some care and it takes specifically looking for it and disinfecting when it is found. It is a challenge to many food factories.”

So does the bacteria live in other cold food other than ice cream? Yes it does. According to the UK NHS, the listeria bacteria have been found in chilled ready-to-eat food such as the following:

Listeria is also found in fruits and vegetables.

Are You at Risk of Listeria Infection or Listeriosis? The listeria bacteria may be found in our food but not all of us are at high risk of infection. Those who are specially vulnerable to listeriosis include:

Healthy adults are rarely at risk of listeriosis but they can get sick if they are exposed to a large dose of Listeria monocytogenes.

Signs and Symptoms of Listerioris. The CDC lists the following symptoms of listeria infection:

Pregnant women: Pregnant women typically experience only fever, and other non-specific symptoms like chills and headache. However, infection during pregnancy can lead to miscarriage, stillbirth, premature delivery, or life-threatening infection of the newborn.

Preventing Listeria Infection. If you are at risk of listeria infection, following these preventive measures suggested by the FDA will go a long way in keeping the bacteria at bay:

COOKING MEAT AND POULTRY: Thoroughly cook raw food from animal sources, such as beef, pork, or poultry to a safe internal temperature.

FOOD STORAGE: Use precooked or ready-to-eat food as soon as you can. Do not store the product in the refrigerator beyond the use-by date.

MILK: Do not drink raw (unpasteurized) milk, and do not eat foods that have unpasteurized milk in them.