Male BRCA Gene Test: Men Who Carry Faulty BRCA Genes. These days, it is safe to assume that everyone and their grandma are aware of BRCA. This is so because practically all media outlets have talked/written about BRCA genes ever since Hollywood superstar Angelina Jolie went public about the fact that she is a carrier of a mutated BRCA gene which causes breast and/or ovarian cancer.

What most of us may not be aware of is this: men can be carriers of the mutated BRCA gene too.

We were ignorant about this fact so imagine our surprise when we read that the geniuses (read: medical entrepreneurs) behind the controversial Color Genomics BRCA test are also marketing their product to members of the Hombre Club. 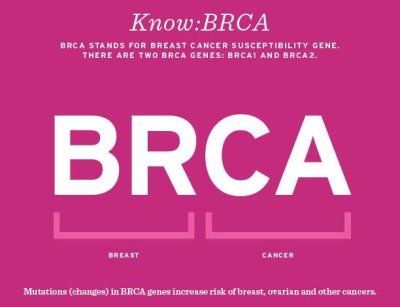 Our thought bubble went like, “What the heck? Why are they selling the test to men when we all know that they can’t be carriers of the mutated BRCA gene??”

Turns out that we were WRONG in the bolded, all caps kind of way.

It turns out too that male carriers of faulty BRCA genes are 1) at higher risk of developing breast and prostate cancer and that 2) they can pass on their faulty genes to their descendants.

Anyhoo, this Q&A courtesy of the Royal Marsden Hospital (PDF file) tells us more about men with faulty BRCAs:

What cancer surveillance can be offered to men who have a faulty BRCA gene?
Male carriers of BRCA mutations are advised to practise breast awareness and to inform their doctors of any changes in texture of breast tissue (due to the small risk of male breast cancer). They may also be offered the opportunity to take part in a research project which is looking at the efficacy of prostate screening using
PSA blood tests annually from the age of 40 to 69. There is a small risk of some other cancers for which screening is not usually considered to be useful. However, this is individualised depending on the family history. As in all cases, men (and women) are advised not to smoke. If there are any new symptoms they should discuss this with their doctor without delay.

Male BRCA Gene Test. So is there a test for the faulty BRCA gene in men? Yes, the Color Test mentioned in our earlier post is also good for men.

All you do is buy a Color Test kit, provide a saliva sample, and wait for the results. The Color Genomics test is priced at a more affordable $249 (which is certainly much cheaper than the $4,000 cost price charged by other companies) but just because it is cheaper does not mean you have to take the test. After all, $249 is money wasted if you really don’t need to undergo a genetic test.

So what kind of men should undergo a genetic test for BRCA mutations? Having a family history of cancer is a good indicator. The Facing Your Risk website tells us more: