Can You Breastfeed After Breast Implant? Yes, You Can! So you want to breastfeed your baby but are afraid that your breast implants will make it difficult or impossible? Or are you thinking of having a breast lift but worry that the implants may make it hard for you to breastfeed when you become a mom?

Worry no more as the verdict is out: Medical and health experts say most women with breast implants can breastfeed without harming themselves or their babies.

“The overwhelming majority of women who have breast implants can breastfeed whether they’re using silicone or saline implants,” Dr. Stephen Greenberg, a board certified plastic surgeon, told ABC News in 2009.

That year, Dr. Greenberg performed 15 breast augmentations a week, reflecting the steadily increasing demand among women for the surgery to make their breasts look larger and fuller.

Since silicone breast implants were first introduced in the United States in the 1960s, breast lifts have steadily gained popularity, and in 2001, surgeons performed 296,203 breast lifts, according to the National Clearinghouse of Plastic Surgery Procedural Statistics. Breast augmentations continue to rank as the No. 1 cosmetic surgery in 2011, the American Society of Plastic Surgeons said.

But many women worry that having a breast lift will keep them from experiencing one of the joys of motherhood.

In breast augmentation, a surgery is done to place implants or breast prosthesis in each of a woman’s breasts. The implants are small bags filled with saline or salt water or silicone gel.

Reports in the 1990s of silicone leaking from implants into the body, causing autoimmune and connective tissue disorders, triggered a flurry of lawsuits and prompted the United States Food and Drug Administration to ban silicone implants in 1992. These also created lasting myths about the dangers of these implants.

Silicone gel won’t leak, not toxic
One common fear is that the implants would leak and contaminate the breast milk.

But the implants involved in reports of leaking were nearly prototypes, and today’s implants have since been reformulated and tested, Dr. Greenberg said

Greenberg said that implants are now made out of memory gel or cohesive gel that doesn’t leak and sticks together instead.

Both types of implants do not present a risk of leaking, Dr. Greenberg said, but silicone implants, because they appear to be more natural, make up 80 percent of his surgeries.

“People are concerned that their kids will be drinking silicone,” said Dr. Greenberg, “But there are no worries whatsoever about leaking free silicone and having the child exposed.” 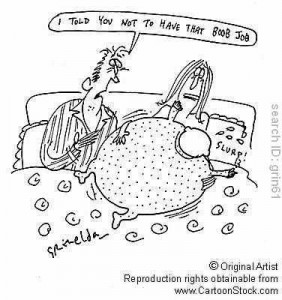 >> Post Related to Can You Breastfeed After Breast Implant: Breastfeeding and Weight Loss

Can You Breastfeed After Breast Implant: AAP Study. According to the American Academy of Pediatrics (AAP), in the 1990s, there were exactly 11 reports of babies suffering esophageal ailments linked to breastfeeding from mothers with silicone implants. But since then, there have been no new reports of similar cases. That AAP is an organization of 60,000 pediatricians.

For over 40 years, the AAP’s Committee on Drugs has monitored the effects of silicone breast implants on breastfeeding, along with the effects of smoking, taking psychotropic drugs like marijuana and heroin and being on drug therapy with common medications. It released its first report, The Transfer of Drugs and Other Chemicals Into Human Milk, in 1983, and updated this in 1989, 1994 and 2001.

“There have been no recent reports of clinical problems in infants of mothers with silicone breast implants,” AAP said in its 2001 update published in Pediatrics, the association’s official publication.

“There was insufficient evidence to justify classifying silicone implants as a contraindication to breastfeeding,” the AAP said.

What the pediatricians are saying is that the benefits of breastfeeding far outweigh any possible risk.

For one, silicon is present in higher concentrations in cow’s milk and infant formula than in human milk expressed from mothers with silicone breast implants, the AAP noted.

“There is no evidence at the present time that the silicon polymer is directly toxic to human tissues,” the report said.

And while there are concerns that “toxicity may be mediated through an immunologic mechanism, this has yet to be confirmed in humans, the AAP added.

What’s more, the report also said that simethicone—used for decades in the US and Europe as the active ingredient in an anti-colic medication and sold under the brand names Maalox, MaaloxMax, Baby’s Own Infant Drops, WindEze, Mylanta Gas Relief, Little Tummies, Kremil-S among others—is very similar to methyl polydimethylsiloxane, the silicone used in breast implants. Simethicone has not been found to be dangerous for children.

Studies have also shown that silicone molecules are too large to pass into the milk ducts and breast gland tissue, the AAP also said in its report.

Can You Breastfeed After Breast Implant: Implant location could affect breastfeeding
But where the implant is inserted has everything to do with the likelihood the woman will be able to breastfeed in the future, Dr. Greenberg warned.

A woman should avoid what is called “nipple smile incisions” if she wants to breastfeed in the future.

“Surgeons often like to make the incision around the nipple because it’s very cosmetic—it’s right where the pigment of the skin changes the scar is not as noticeable,” said Dr. Marianne Neifert, a pediatrician and author of Great Expectations: The Essential Guide to Breastfeeding.

“But all the milk ducts that drain the different lobes or sections of the breast kind of convene there,” said Dr. Niefert.

“It’s possible to accidently cut milk ducts or the nerve that sends the signal to your brain to release more hormones that then helps you to produce more milk,” she added.

She also warned that cutting a nerve accidently during a breast augmentation surgery could also result in the nipple become overly sensitive and this would make breastfeeding painful.

Can You Breastfeed After Breast Implant: Less milk produced. Women are also advised to get an implant that puts less pressure on the mammary glands so that it can produce milk.

“The mammary gland, like any other gland, performs normally when it has blood supplies and space to grow,” said Dr. Miriam Labbok, Carolina Global Breastfeeding Institute’s director.

“But when you put pressure on any gland in the body you risk it malfunctioning and compromising lactation.”

According to the Institute of Medicine (IOM), the National Academy of Sciences’ health arm, women who have had any kind of breast surgery, including breast lifts, are at least three times more likely to have “lactation insufficiency” or an inadequate milk supply.

The IOM based that conclusion on several studies of women with breast implants or who have had other kinds of breast surgeries.

The study found that mothers with previous breast surgeries were three times more like to have babies with slower weight gain (did not gain at least one ounce per day) or required supplemental feedings with formula. This two are indicators of lactation insufficiency, the study said.

Can You Breastfeed After Breast Implant: Physical and psychological benefits
The AAP recommends exclusive breast-feeding for the first six months of a baby’s life, and continued breastfeeding for at least their first year.

Skin-to-skin contact between mother and child increases the production breast milk and the maternal milk antibodies to specific germs in the baby’s surroundings.

Babies who have breastfed from the breast have been found to be able to learn faster and to have developed fewer psychological, behavioral and learning problems as they grow.

Many famous women who have had breast implants are able to breastfeed.

In 2009, reality television star and former Playboy model Kendra Baskett was pleasantly surprised to learn that her fake breasts did not stop her from breastfeeding.

“I was so scared that I wasn’t going to be able to nurse that when I saw stuff come out of my nipples the other day, I was like, I can breastfeed?” Baskett, told the US Magazine.

Related Readings on Can You Breastfeed After Breast Implant:
Breastfeeding and Weight Loss
BPA in Baby Bottles

Can You Breastfeed After Breast Implant? Yes, You Can! Posted 19 December 2011.