Acupuncture for Children: Safety and Side Effects. Acupuncture is safe for children, a recent large study in the journal Pediatrics said, but only in the hands of a trained practitioner.

The meta study—or analysis of 37 international studies—found that about one in 10 children experienced mild side effects like bruising, pain and numbness at the puncture site. But more serious side effects like infections and nerve impairment were rare.

“I would say the circumstances in which the serious harms happened do not reflect the modern-day standard of training and credentialing,” said Dr. Sunita Vohra, a professor of medicine at the University of Alberta on Canada and an author of the study.

The results of the large study on acupuncture for children, undertaken by the University of Alberta researchers were reported by the New York Times on Nov 22.

The study was the first large-scale systematic review on the safety of acupuncture in children. Previously, large studies focused on acupuncture in adults and found similar complication rates: Serious side effects occurred in about five of every million treatment sessions.

Acupuncture is one of the most common alternative healing practices in the United States, used by about three million people every year. 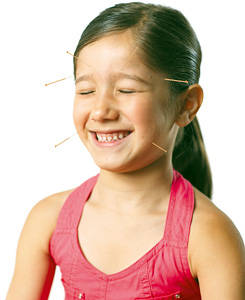 Increasingly, it is being used to relieve pain, migraines and other complaints in children. About 150,000 children in the U.S. underwent acupuncture in 2007, according to government estimates.

In the study, researchers focused specifically on children, combing through data of 37 international studies conducted over the past few decades, including both high-quality randomized trials and single case reports of injuries.

The research, financed in part by the Canadian Institutes of Health Research, did not try to answer whether acupuncture is actually effective in children. It only sought to consolidate the results of all previous studies on pediatric acupuncture.

In all, out of 1,422 children and teenagers who were included in the analysis, 168 experienced “mild” side effects.

More serious problems were rare and tended to be limited to clinics that did not adhere to strict safety standards.

These included 12 cases of “deformity” from damage to a muscle in the thumb, all reported from the same clinic in China between 1983 and 1989.

In another case, a 15-year-old boy in the U.S. had to be treated extensively with antibiotics when he developed a fever after undergoing acupuncture and chiropractic treatment for back pain.

“That kind of practice is not what would be expected in most places,” Dr. Vohra said.

Acupuncture for Children Regulation
According to the New York Times, most American states and Canadian provinces now regulate acupuncture to ensure certain standards of safety and certification, but regulations vary by state.

In contrast, the practice of acupuncture is not regulated in the United Kingdom.

“This means that anyone can call themselves an acupuncturist, even if they have no training or experience,” U.K.’S official health regulator said.

But acupuncture is safe when carried out by a qualified practitioner, the National Health Service said on its website. Serious side effects or complications arising from treatment are extremely rare.

“If you want to visit an acupuncturist, it is important to check that they carry out the treatment in a way that is safe, hygienic and acceptable to you,” the NHS warned.

The health agency also advised consumers to visit the websites of acupuncture organizations that require their members to bear certain qualifications and work according to certain codes of practice.

While some studies have shown that acupuncture can ease chronic neck and back pain and migraine symptoms in adults, “the amount of research done in kids is pretty minimal,” said Michael Waterhouse, the head of acupuncture at the University of California, Los Angeles, pediatric pain program.

According to him, the results he sees in children who are treated with acupuncture at U.C.L.A. “are as good as the results we get in adults.”

More research is needed though, he noted. “There have been some small studies on migraine showing it’s helpful in reducing their frequency and increasing endorphin levels, but that has not been repeated,” he said.

One study from Harvard Medical School in 2000 looked at the effects of acupuncture on a group of about 50 children, mostly teenagers seeking relief from migraines or endometriosis, a condition that can cause painful menstruation.

“Most families found acupuncture pleasant and helpful, even for pain that had been very resistant to standard treatment,” the authors wrote. “Although some began with anxiety about the needles and misgivings about the treatment, many developed more positive attitudes over the course of treatment.”

Again, the authors noted that more research was needed before the results could be generalized to other young patients.

“Most of the patients in this study were adolescents; younger children’s experiences might be quite different,” they wrote.

“Future studies will need to examine children’s and families’ experience with acupuncture for the entire spectrum of illnesses for which it is used.”

Who may not have acupuncture?
Due to the slight risk of bleeding, people with bleeding disorders, such as hemophilia, where blood is unable to clot, may not be able to have acupuncture.

People with blood disorders or those who are taking anticoagulants or medicines that prevent the blood clotting may not also be able to have acupuncture.

It is generally safe for pregnant women to have acupuncture. But because certain acupuncture points cannot be used safely during pregnancy, women are advised to inform their practitioner if they are pregnant.

Acupuncture for Children: Safety and Side Effects. Posted 8 December 2011.