Norovirus Vaccine for Cruise Ship Virus? Researchers may soon roll out a vaccine to prevent people from catching the norovirus, the “winter vomiting bug” or “cruise ship virus,” blamed worldwide for outbreaks on cruise ships or on planes and in hospitals, schools and prisons during the winter.

That is, if the researchers at the Baylor College of Medicine in Houston, Texas, are able to improve an experimental vaccine developed for the first time against the highly contagious virus that brings sudden cramping, vomiting and diarrhea to three million people across the world every year.

The vaccine has been shown to halve the chances of catching norovirus, called the “cruise ship bug” after repeated outbreaks have plagued the cruise industry for decades.

But norovirus outbreaks also occur often in other closed or semi-closed communities like schools, hospitals, dormitories, prisons and overnight camps, where they are spread rapidly by person-to-person transmission or through contaminated food.

In 2005, a norovirus epidemic broke out among Hurricane Katrina refugees housed in the Reliant stadium in Houston, Texas.

In many countries it is also known as the “winter vomiting bug” when it strikes millions of people during the winter, as they spend more time indoors.

The experimental vaccine, given in two doses three weeks apart via a nasal spray, brings hope that such outbreaks can be controlled or prevented in the future.

“This is the first demonstration of protection in humans against what is a widespread and often serious illness and is a big development for the field,” said Robert Atmar, M.D., of Baylor College of Medicine and the study’s principal investigator.

The study was a multi-center trial undertaken by a consortium of research centers whose members are the Johns Hopkins University, University of Maryland, Cincinnati Children’s Hospital, SNBL Clinical Pharmacology Center, Inc., The EMMES Corporation and the Baylor College of Medicine. It was published in the New England Journal of Medicine on Dec. 10.

No safety issues were witnessed in the study and the side effects noted were mild: stuffy nose and sneezing.

In this most recent study to test the experimental vaccine, Dr. Atmar’s team gave 98 people—all of them bearing the FUT2 gene that makes them more susceptible to norovirus—either the vaccine or an inactive placebo.

Three weeks after the second dose—time enough for their immune system to respond—both groups of participants were exposed to the norovirus.

The study showed that the participants who received the vaccine were 70 percent less likely to suffer the cramping, diarrhea and vomiting associated with the norovirus than those who were given a placebo.

While some vaccinated participants still contracted the virus, they experienced symptoms a third milder than those who got the placebo.

First steps towards norovirus vaccine
These results are an “important step toward preventing the disease,” Dr. Robert Frenck, MD, a professor of pediatrics who researches noroviruses at the University of Cincinnati told WebMD on Dec. 10.

“This is early, but it’s encouraging,” said Frenck, who was not involved in Atmar’s study.

The vaccine could be especially useful for populations such as soldiers or the elderly, he said.

Dr. Josh Bloom, PhD, Director of Chemical and Pharmaceutical Sciences at the American Council on Science and Health said he was excited over the experimental vaccine.

“I think the vaccine’s efficacy rate needs some improvement,” he said on an article on the ACSH’s site, “but since the virus leads to 800 deaths in the U.S. annually—mostly among the elderly—and about 100,000 hospitalizations, any advances in preventing this illness will be welcome news.”

Researchers behind the development are proud to say that by the time the vaccine is rolled out, it will become just the second vaccine for gastrointestinal disease.

But it won’t be ready for mainstream use for another five to 10 years, Dr. Atmar said.

And before that researchers will have to address many questions: How long does the vaccine offer protection? Will people will need to take the vaccine repeatedly, like the annual flu shot, to stay protected? Will the same type of vaccine protect against other strains of norovirus? There are several strains of norovirus, but the study only looked at one strain of the virus, the Norwalk strain and Dr. Atmar’s team plans to test the vaccine on additional strains.

The new study was supported in part by LigoCyte Pharmaceuticals, maker of the vaccine. 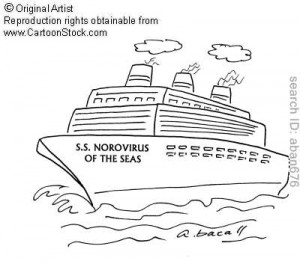 Deadly in developing world
While norovirus is highly contagious, it is mostly seen in the United States, Canada and Europe as a slight bother—causing intense but short-lived bouts with cramps, diarrhea and vomiting. Less common symptoms include low-grade fever, chills, headache, muscle aches, nausea and tiredness

It is not dangerous to otherwise healthy people and most sufferers recover within one or two days with no long-term adverse health effects. There’s no specific treatment aside from replacing fluids.

But in the developing world, norovirus is responsible for the deaths of more than 200,000 children every year.

It is the most common cause of diarrhea people younger than 18, and makes up two-thirds of all diarrhea cases in babies between six months to two years old.

Because the illness often begins suddenly, babies and toddlers may feel very sick and vomit more than adults.

In the U.S., it can also be fatal in the elderly and other immune-compromised people.

Norovirus is a hot topic in the cruise ship industry, plagued by outbreaks, but epidemics are not more frequent on these ships as they are on other closed communities on land.

More cases of norovirus are reported in cruise ships because health officials track illness on these ships and outbreaks are therefore found and reported more quickly on these ships than on land.

Dr. Thomas Hooton, an infectious disease professor at the University of Miami Miller School of Medicine, said the norovirus is “a mess and spreads like wildfire.”

“If a food handler contaminates the food on a cruise ship, it spreads like crazy. There is bad diarrhea and bad vomiting, and if they are not cleaned up properly, it can stick to surfaces and spread from person to person,” Hooton said.

Norovirus is spread by
1. Eating food or drinking liquids infected with noroviruses
2. Touching surfaces or objects infected with noroviruses and then touching own mouth, nose, or eyes
3. Having person-to-person contact (with a norovirus-infected person) by
• being present while someone is vomiting
• sharing food or eating from the same utensils
• caring for a sick person
• shaking hands
4. Not washing hands after using the bathroom or changing diapers and before eating or preparing food.

A 2009 study published in the Clinical Infectious Diseases journal pointed toward poor restroom cleaning as a reason for the virus’ spread.

Shellfish, salads, raw clams and oysters are the foods most commonly implicated in the spread of Norovirus during outbreaks.

Hand washing key to prevention
• Wash hands often.
• Wash hands after using the bathroom or changing diapers and before eating or preparing food.
• Wash hands more often when someone in your home is sick.
• Avoid shaking hands during outbreaks.
• Use alcohol-based hand sanitizer along with handwashing.

What to do if you get norovirus
• Advise the medical staff of your illness.
• Drink plenty of fluids.
• Wash hands often.