Tick Bite Deaths: Can You Die From Tick Infection? Can you die from tick infection? Yes you can! Sure tick bites, for the most part, are not fatal but infected ticks can pass on their deadly viruses to a victim and this can have deadly consequences.

Let’s check out several cases from around the world where seemingly harmless tick bites caused the deaths of patients.

According to the Center for Disease Control (CDC), the Rocky Mountain spotted fever (RMSF) which ended Emilee’s life is “a tickborne disease caused by the bacterium Rickettsia rickettsii”.

Minnesota, USA. In 2011, Minnesota health authorities revealed that a woman died from a tick bite bite while another became gravely ill.

Here’s the media release detailing the two cases (from the Minnesota Department of Health): “A woman in her 60s from northern Minnesota has died from a brain infection due to Powassan (POW) virus. This is the first death in the state attributed to the disease. One other likely POW case has been identified this year in Minnesota, in an Anoka County man in his 60s who was hospitalized with a brain infection and is now recovering at home. POW virus is transmitted through the bite of an infected tick.”

The media release adds: “Both 2011 cases became ill in May after spending time outdoors and noticing tick bites. The fatal case was likely exposed to ticks near her home. The case from Anoka County might have been exposed near his home or at a cabin in northern Minnesota.”

From kmov.com: “An O’Fallon, Illinois EMS worker suddenly died Tuesday from a possible tick bite. According to police, Michelle Heap had been on several camping trips over the last few weeks and her symptoms were consistent with a tick born illness. Experts say ticks become a major problem six months out of the year between the months of April and September. According to experts, Ehrlich-I-Osis is the most common tick born disease in Missouri with only one to two percent of patients dying from the disease. Ehrlich-I-Osis is treatable with antibiotics if caught early.” 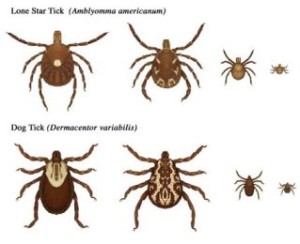 South Korea. Tick bite infections leading to death is not limited in the United States. Here’s a case reported by Arirang News in South Korea:

The Korea Centers for Disease Control and Prevention announced Tuesday it had confirmed that a 63-year-old woman died of SFTS, or severe fever with thrombocytopenia syndrome, last August. The woman suffered from high fever, diarrhea and multi-organ failure — all common symptoms of the disease.

She died around ten days after she was hospitalized and the cause of death had been unclear at the time. The disease control center confirmed Tuesday, that the cause of death was the deadly tick-borne virus. They said she had sustained the tick bite on a farm near her home in northeastern Gangwon Province.

Australia. Meanwhile in Australia, a lethal tick infection has been found to be partly responsible for the death of a 56 year old man. From the Sydney Morning Herald:

A POTENTIALLY lethal tick infection newly identified in Australia has mysteriously emerged on the NSW south coast. Doctors have revealed the first reported Australian case of human babesiosis, a tick-borne infection that carries a 5 to 10 per cent fatality rate, higher than the death rate from the most common tick bite infections.

The victim was a 56-year-old man from the south coast who died, it is thought, partly as a result of babesiosis. His infection was discovered only by chance, when his blood samples were re-checked four months after he had been admitted to Canberra Hospital with serious injuries after a car crash in November 2010.

In a report published today in the Medical Journal of Australia , doctors say the infection probably contributed to his death from multi-organ failure last April.

Turkey. In Turkey, Today’s Zaman newspaper reports the case of a couple who were bitten by ticks. The husband survived the tick infection but, sadly, his wife did not:

Hatice Çalışkan, 25, lost her life on Thursday at the hospital where she was being treated for Crimean-Congo hemorrhagic fever (CCHF) contracted from a tick bite.

In Karahacılı village in Yozgat’s Çekerek district, Hatice and her husband Hamza Çalışkan were bitten by ticks while working in the fields nearly 10 days ago. The couple removed the ticks from their skin by themselves. Hamza Çalışkan was hospitalized at Çetinkaya Çekerek State Hospital two days later. After tests were performed on the couple, who were suspected to have contracted CCHF, they were transferred to Ankara Numune Education and Research Hospital. Hatice Çalışkan died of the infection despite medical attention, while Hamza Çalışkan’s health is reportedly improving.

Russia. The case of a girl who died following a tick bite infection was reported by the Russian News Agency, RIA Novosti. Via survincity.com:

A resident of Zlatoust, Chelyabinsk region in late June 2011, died after a tick bite, a similar case — the first in five years, according to a Friday press service of the city administration.

“Tick bites 17-year-old girl on June 5. She immediately turned to doctors and the injection of immunoglobulin. However being affected continued to deteriorate. After 17 days she was in the hospital, where, despite the efforts of doctors, she died,” — said in a statement.

Experts note the high activity of ticks, not only in the forest area and the gardens, but also in the city. “For citizens to recommend safety precautions, especially during visits to the country,” — says the statement.

China. And finally in China, health authorities revealed last 2011 that a previously unknown virus spread by ticks caused the deaths of at least 36 people. From China Daily:

Chinese scientists have discovered a previously unknown virus carried by ticks which led to at least 36 deaths in six provinces by last September, according to the latest issue of the New England Journal of Medicine published Thursday.

The virus SFTSV (severe fever with thrombocytopenia syndrome bunyavirus) was recently discovered by scientists at the Chinese Center for Disease Control and Prevention (CDC).

People with the virus can experience fever and multiple organ failure.

The presence of the virus was confirmed in 171 patients from six provinces in China. It resulted in at least 36 deaths by September 2010.

What all these cases tell us is to not ignore tick infections.