He received physical therapy, antibiotics and steroids but these didn’t work as no significant change was seen in his health condition. Things improved when the police dog was treated with stem-cell therapy.

The Toronto Star describes the treatment procedure developed by Vet-Stem, a California company which has treated about 700 dogs:

In the procedure, a small incision is made in the abdomen—where fat cells are readily available—and some cells are removed (fat cells are used because 1 in 50 of them is a stem cell, the highest concentration in the body). The fat cells are shipped to Vet-Stem and processed. The stem-cell samples are returned—other samples are stored at Vet-Stem in case they’re needed later—and administered. 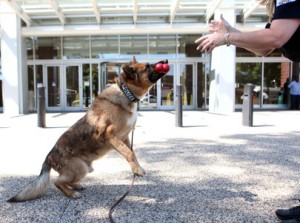 In Dasty’s case, it was both intravenously and through injection. That entire process takes just two days. The cost varies between $2,300 and $4,500, depending on the size of the dog and the number of injections needed.

The five-year old German shepherd is now back in active service. Since his return, he found thousands of cash amounting to $40,000 and $173,000 as well as 21 kilograms of cocaine.

Despite his successful treatment, Dasty is still required to go to the clinic for periodic check-ups.

When we first read this news report about stem cell for pet dogs that could cost as much as $6,000 (Australian), we’re like, “Geeze, how many starving street kids would that amount of money save?” But then, that’s us. We aren’t what you would call a “pet person” and we must admit that we are always baffled by the amount of money pet owners are willing to spend on their pets.

From the Otago Daily Times:

Pet Doctors, New Zealand’s biggest companion animal veterinary group, has announced an agreement to treat dogs with stem cell technology. New Zealand will be only the third country in the world to offer this type of therapy for dogs, along with Australia and the United States.

Says Pet Doctors chief executive Steve Merchant of the new treatment procedure: “Many pet-owners have experienced the heartache of seeing a previously active dog deteriorate in mobility – for simple things like getting into the car, going for walks, or having a play at the beach. Often the mind is willing but the body is not.”

He adds: “By using the dog’s own fat cells and genetic material to regenerate their joint, they can lead healthier and more active lives without drugs. It is expensive and it’s not for every dog but it will help in many cases. Dogs are living longer and owners are forming closer bonds to their animals so there will be a demand for this treatment.”

How expensive is this stem cell pet therapy? As we mentioned above, it reportedly costs around $6000 (in Australia) which is pretty expensive for ordinary pet owners like us.