The excitable British television host who’s famous for shouting words like “You are ….. NOT the father of her baby” and “Get off your lazy backside and get a job” has been diagnosed with testicular cancer shortly before Christmas. Following the diagnosis, he immediately had surgery and chemotherapy and is now recuperating.

How did the 47-year-old father of four discover his testicular cancer? He noticed a lump and decided to have it checked. Says a friend who talked to the Daily Mail:

Just by chance he noticed he had a lump and decided to get it checked out. When the doctors told him it was toxic it turned his family’s life upside down. He hopes to be back filming his show soon. He won’t let this beat him.

How common is testicular cancer? Not common at all. In fact, it comprises only one percent of all cancers that occur in men. 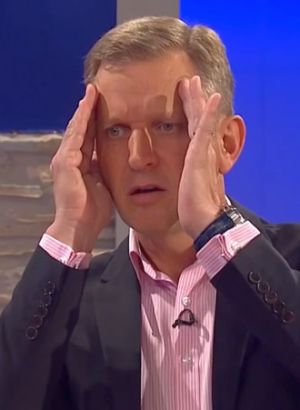 However, the disease is more common among whites than among blacks and Asians. It is also much more likely to affect those aged from 20 to 39 years old than those in other age groups. The incidence rate is also higher in the developed regions of the world than in the less developed areas.

Is it treatable? If you are looking for a silver lining when it comes to testicular cancer, it would no doubt be the fact that 95% of those diagnosed early will most likely be cured.

Moreover, a testicular cancer diagnosis is not a death sentence as only a very few of those diagnosed with the disease die because of it.

From the UK NHS:

Even cases of more advanced testicular cancer, where the cancer has spread outside the testicles to nearby tissue, have an 80% chance of being cured.

How is testicular cancer treated? Treatment involves orchidectomy or the surgical removal of the affected testicle. [For those who are wondering, no your sex life and fertility will not be affected by the removal of just one testicle.]

After the surgery, the patient will undergo chemotherapy the frequency of which depends on the stage the cancer was discovered and treated.

Anyhoo, we’re happy that Jeremy has beaten his cancer scare and that he will soon be back on the small screen to say things like, “You are … NOT the biological mother of your baby!”