The healthier purple potato is coming to UK supermarkets. Why is it healthier? Because, compared to the traditional white potato, it contains up to 10 times the level of antioxidants which helps you maintain a healthy heart.

A study by the Queen Margaret University in Edinburgh and the Scottish Crop Research Institute shows that the potato’s natural purple pigment has a positive effect on blood vessels and in reducing blood pressure. 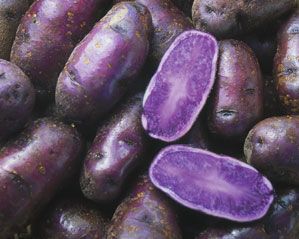 “It’s this pigment that gives the potato the purple appearance, but more importantly, it possesses antioxidant properties, which are maintained even after cooking.”

She adds: “We’re all aware of the stories about red wine having a more positive effect on the heart than white wine, due to their higher levels of antioxidant.

“The same thing applies to purple potatoes. Anthocyanins have potent antioxidant properties and some studies have shown that it has a positive effect on blood vessels and reducing blood pressure.”

The potato will be on sale in Sainsbury’s stores across Scotland and southeast of England starting this week. Some trials found that Purple Majestys could be grown in Scotland.