Famous People Who Had Heart Bypass Surgery: Bill Clinton. He’d been complaining of chest discomfort over several days, and on Feb. 11, 2010, Former President Bill Clinton underwent a successful heart procedure at the Columbia campus of the New York Presbyterian Hospital.

After putting Mr. Clinton through a battery of tests — including an angiogram, an electrocardiogram and blood tests — doctors found no evidence of heart attack or damage to the heart but noticed that one of the four bypass grafts he had received in 2004 was completely blocked. The surgeons then inserted two stents into his native coronary artery to increase blood flow to the heart.

“President Clinton is in good spirits and will continue to focus on the work of his foundation and Haiti’s relief and long-term recovery efforts,” said his counselor, Douglas J. Band, in a statement released by the former president’s office.

A few days earlier, Mr. Clinton had just returned from his second trip to Haiti after a devastating earthquake claimed more than 200,000 lives in January 2010. Serving as the United Nations special envoy to Haiti, the former Democratic president had been helping coordinate relief and recovery efforts for that Caribbean island.

Mr. Clinton, then 63, had a history of heart trouble. In 2004, he had had a quadruple coronary artery bypass surgery, also done at the New York Presbyterian Hospital’s Columbia campus. At that time, doctors took blood vessels from elsewhere in Mr. Clinton’s body and grafted them onto his heart to circumvent four blocked heart arteries. Six months later, he developed rare complications in his lungs — to remove scar tissue and fluid that had built up — that required another operation.

Mr. Clinton has since recovered.

The blockage of grafted heart vessels is not unusual in bypass patients, cardiac experts say. An obstruction occurs as soon as five years or as late as 10 years following the initial surgery. This depends on whether the grafts are veins or arteries — with veins being smaller and less flexible than arteries.

Dr. Clyde Yancy, then the president of the American Heart Association told TIME magazine: “It’s important to remember that blocked blood vessels are not an event but a disease. We know blockages have their own natural history, and this just highlights the need to always be at the ready.” Dr. Yancy was not involved in Clinton’s care but was speaking in general about what to expect after bypass surgery.

Since his bypass surgery, the former president had maintained a rigorous schedule — accompanying his wife on the campaign trail during her own bid for President in 2008, giving speeches and working with his global charitable foundation.

But his cardiologist, Dr. Allan Schwartz, clarified that the blockage wasn’t caused by that. “This was not a result of either his lifestyle or his diet, which have been excellent,” said Schwartz. “His cholesterol numbers and other risk factors that we follow have all been excellent.”

Dr. Yancy explains that even patients who do everything right to maintain a healthy heart — reducing stress, exercising and eating a healthy diet — can end up with new vessels blocked again.

Heart disease is a progressive condition that is not cured by surgery, the surgeon said. “This is a chronic condition,” said Dr. Schwartz. “We don’t have a cure.” But to decrease the risk of future heart events it’s crucial that bypass patients to control risk factors — maintain healthy weight, lower cholesterol and blood pressure and not smoke.

Mr. Clinton, then 58, had been experienced prolonged chest pains and shortness of breath and an
angiogram found that several coronary arteries were more than 90% blocked. In an interview with CNN’s Larry King, Clinton credited the angiogram for saving his life: angiograms involve threading a catheter and injecting dye through the heart vessels to see blockages by x-ray.

The two-term Democratic president had undergone a quadruple-bypass surgery meant to prevent a heart attack. Heart attacks are a leading cause of death and disability in the United States and the world, with about 920,000 happening in the U.S. annually, killing 157,000 people. The quadruple bypass re-routed blood flow through grafts — or replacement vessels — bypassing blocked vessels. Coronary artery bypass graft (CABG) is one of the most commonly performed major operations in the U.S., with 427,000 done in 2004 alone, according to the American Heart Association.

“If people have a family history there, and high cholesterol and high blood pressure, they ought to consider an evaluation,” Mr. Clinton said a few weeks after his bypass.

When he left office in January 2001, Mr. Clinton’s level of LDL (low-density lipoprotein) cholesterol — the so-called “bad” type — was 177, about 100 points higher than recommended.

On top of having all three major risk factors for heart disease, the former president also had a well-known penchant for eating fast food and smoking cigars — at least during his presidency. These are two other predisposing factors.

“Some of this is genetic, and I may have done some damage in those years when I was too careless about what I ate,” the former president said.

He has also had a life-long struggle with chubbiness, but had been particularly fit in the past year before his surgery — lifting weights, and losing weight using a modified version of the South Beach Diet. But he admitted that had regained 10 pounds during a tour promoting his memoir, “My Life.”

After Clinton’s bypass surgery in fall 2004, hospitals nationwide saw a surge of anxious midlife men having their cardiac health checked, a phenomenon dubbed the “Clinton Syndrome.” Many paid hundreds of dollars for non-invasive CT (computer tomography) scans that can detect blockages in coronary blood vessels. 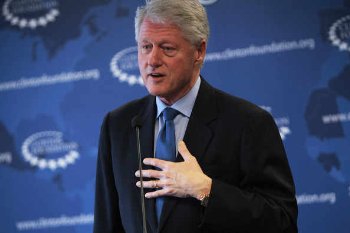 What is coronary artery bypass graft (CABG) surgery?
CABG surgery creates new routes around narrowed and blocked arteries, allowing sufficient blood flow to deliver oxygen and nutrients to the heart muscle. It’s indicated for patients who have one or more arteries feeding the heard significantly narrowed or blocked. This is known as coronary artery disease (CAD) and high cholesterol levels are the leading culprit.

“If your water supply is blocked between the water main and your kitchen tap, when you open your faucet you may get a reduced water flow,” explains Dr. Jeremy Ruskin, Massachusetts General Hospital’s director of the cardiac arrhythmia service. “One way to deal with that is to bypass the blockage — you put a pipe near the main and run it into the point where the old pipe is blocked.”

The buildup of plaque — the atherosclerotic process — makes one or more of the coronary arteries narrower. If your coronary arteries narrow more than 50 to 70 percent, the blood supply going to your heart becomes inadequate to meet the increased oxygen demand when you exercise. This starves the heart muscle in the territory of these arteries of oxygen (ischemic). When your blood oxygen supply can’t keep up with demand, you then experience chest pain or angina. But despite lack of adequate blood and oxygen supply, some people don’t experience chest pain at all. These people who have “silent” angina have the same risk of heart attack as those with angina — and up to 25 percent of patients with coronary artery disease are like this.

A heart attack happens when a blood clot — thrombus — forms on top of this plaque and the artery becomes completely blocked.

If your arteries have narrowed beyond 90 to 99 percent, you will suffer from accelerated angina or angina at rest, called unstable angina. Unstable angina can also occur due to intermittent blockage of an artery by a thrombus that eventually is dissolved by the body’s own protective clot-dissolving system.

Your doctors will thus combine the EKG with exercise treadmill tests to screen you — especially if you have a moderate chance of significant coronary artery disease. Together, these two procedures are about 60-70 percent accurate in diagnosing significant CAD.

If the stress tests do not reveal the diagnosis, CAD can be identified more accurately with nuclear imaging. This is done by adding a nuclear agent — thallium or Cardiolite — intravenously during stress tests. The thallium allows nuclear imaging of the blood flow to different regions of your heart and it can be seen more clearly if an area of your heart with normal blood flow at rest suffers reduced blood flow as you exercise. This signifies significant artery narrowing in that region.

There are times that a patient cannot undergo exercise stress test because of nervous system or joint problems. In these cases, medications can be injected intravenously to simulate the stress exercise puts on the heart. Imaging can be performed with a nuclear camera or ultrasound.

The most accurate test to detect coronary artery narrowing is cardiac catheterization with angiography — or coronary arteriography. Under x-ray guidance, small catheters or hollow plastic tubes are advanced to the openings of the two main heart arteries, left and right. An x-ray video is then recorded as iodine contrast “dye” is injected into the arteries. Sometimes, an exercise study is then done to determine whether a moderate narrowing of 40- 60% is actually causing ischemia, requiring treatment.

A newer high speed CT scanning angiography has recently become available, but its role in the evaluation of CAD is still being evaluated. This procedure uses powerful x-ray methods to visualize the arteries to the heart.