Celebrities With Tourette Syndrome. Named after French doctor Georges Gilles de la Tourette, who was the first person to describe it and its symptoms, Tourette syndrome is a condition characterized by repetitive persistent involuntary movements and vocalizations. According to a the Centers for Disease Control and Prevention (CDCP), one of every 360 American children ages 6 through 17 years old have been diagnosed with Tourette Syndrome.

Tourette’s is found to co-occur with other mental health, behavioral, or developmental condition. Specifically, a CDCP study found that 86% of children with Tourette’s have also been diagnosed with any of the following:

To date, the medical community has not found a cure for Tourette’s but there are treatments (like the Comprehensive Behavioral Intervention for Tics) which can help a patient manage his or her tics.

Tim Howard, Everton goalkeeper. Last year, Howard received the first-ever “Tourette Syndrome Association Champion of Hope Award” from the Tourette Syndrome Association for his “the tremendous courage he displayed in sharing his story on an international platform, educating the public on a disorder that is so seldom talked about, and encouraging young people living with TS to speak out about their experiences”. 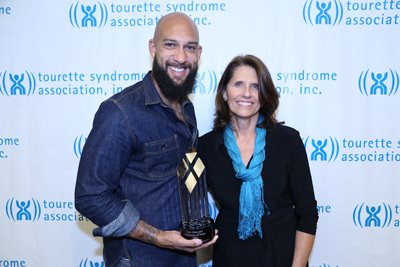 In his book — The Keeper: A Life Of Saving Goals And Achieving Them — the American football star who currently plays for the Everton Football Club, had this to say about how TS manifested itself when he was a child:

I was 10 when the symptoms began to appear. First came the touching: I walked through the house tapping certain objects in a particular order. Touch the railing. Touch the door frame. Touch the light switch. Touch the wall. Touch the picture. The pattern might vary, but there was always a specific rhythm, and it had to be followed. Exactly. If it wasn’t – if I tried to resist – I had to start all over again, until I got it right.
…
Next came the tics. Each started the same way: with an uncomfortable sensation in some part of my body – a heightened awareness, an urge. The feeling could be relieved only by some specific motor action. I started blinking, for example – forceful, deliberate blinks that I couldn’t stop. I began to clear my throat over and over. Then there were facial jerks. Shoulder shrugs. Eye rolling.

You should go buy Tim’s book on Amazon.

Dash Mihok, actor. Currently starring as Det. Arnold John Flass on the Fox hit show, Gotham, Dash was diagnosed with TS when he was 6 years old. Like Tim, Dash is an active supporter of the Tourette Syndrome Association.

Here’s what Dash says (via wikipedia) when asked to give advice to people with TS:

I’d say don’t be afraid to tell people about your TS; don’t hide it. The stress of hiding it is too much. If you’re afraid that people won’t understand, then they probably won’t be in your life, anyway. Be as open as you can. It takes it off you and alleviates the worst of your TS. Don’t be afraid. You can do anything you want to do. If you think you can, you can. There are top neurosurgeons with TS. The sky is the limit. Don’t limit yourself.

Mahmoud Abdul-Rauf, retired pro-basketball player. Formerly known as Chris Jackson, Mahmoud was diagnosed with TS relatively late at age 17. Sports Illustrated has a touching write-up about his life as an NBA star living with Tourettes:

In the same way Tourette’s makes him open and close the refrigerator door over and over until it feels perfect, in the same way it makes him set a water glass down on a restaurant table repeatedly until it feels perfect, Tourette’s made him shoot and shoot and shoot until his shot felt perfect.
…
The NBA had never had an acknowledged Tourette’s sufferer. In fact, there was only one other athlete in all of U.S. pro sports who had openly discussed his Tourette’s — Jim Eisenreich, currently of the Philadelphia Phillies.

There are reasons that their numbers are few in pro sports. For instance, being around a person even moderately affected with Tourette’s can wear you out. Jackson cries ”Whoops!” all the time.

The more excited he is, the more he involuntarily ”Whoops!” Often, when out and about, he will whoop a large whoop and some woman will turn and look at him, and he will have to say politely, ”No, no, sister. I don’t want you.”
…
Once, at a function with the governor of Colorado, Roy Romer, Jackson was sitting in a chair behind the dais and loosed an ”Uh-huh!” and a ”Whoop!” in the middle of Romer’s speech. Romer, unaware of Jackson’s affliction, turned politely and said, ”Chris, would you like to add something?”

I believe that every child who has Tourette Syndrome can find personal success in their life. With the support and encouragement of their parents, families, teachers, friends and doctors, there is no limit to what a child with Tourette can achieve.

Michael Wolff, jazz musician. Michael currently chairs the Tourette Syndrome Association which seeks to “identify the cause of, find the cure for, and control the effects of Tourette Syndrome”. A Mercury News profile on Michael tells us about the challenges of a young man growing up with TS and how his condition may how impacted his decision to become a jazz pianist:

“My Tourette’s was never really diagnosed correctly . . . When I was in high school, I think the kids thought I was on drugs because of the tics.”

The cruelest comments, he recalls, went something like: “Oh, man, he’s always singing to himself — he must be doing a lot of cocaine or he’s on speed.”

Looking back, Wolff says he thinks he gravitated to jazz because the field has always welcomed, indeed celebrated, societal misfits. For the young musician, jazz became “a sort of cloak” that helped him fit in.

“Maybe I was guided to jazz by Tourette’s,” muses Wolff, who has learned to control the symptoms without medication. “I could be accepted in this world because it wasn’t buttoned down. When I played, the other stuff, the tics, were overlooked.”

Steve Wallace, NASCAR driver. During a NASCAR teleconference, Steve talked about his condition:

But I’ve had Tourettes since, heck, I don’t know, since I was about seven or eight years old. Like a lot of people where they have verbal Tourettes where they freak out and yell stuff and all I do is twitch my head and eyes a little bit. So it’s not Tourettes like it is Â¿ by like any means because when people say Tourettes, you know, people like think you’re going to freak out and bite their arm or something. But definitely it ain’t nothing like that.

Jeremy Stenberg, motocross rider. Nicknamed Twitch because of his condition, Jeremy was diagnosed with TS when he was 8 years old. He tells us more in this interview released by the Tourette Syndrome Association (tsa-usa.org):

TSA: Does TS have an impact on your performance as an athlete?
Jeremy: I don’t think so, not a negative impact. It’s helped me get more fans and given me a nickname “Twitch.” It was a little weird at first and kind of bothered me, but now it’s stuck and I’m fine with it. All my fans know me as “Twitch.” It’s all good.

Because of my tics I got teased in school and got into fights, but I think it made me stronger. I had to prove that I can still do this, that I’m still ‘normal’, that I have tics, make funny faces and shake my head, while still riding.