Meanwhile, the signs and symptoms of endometrial cancer may include the following:

Okay, now that you have familiarized yourself with the basics of this disease, let’s now check out the list of celebrities with endometrial cancer. Let’s begin with:

Dixie Carter, actress. This Emmy-nominated actress died from complications of endometrial cancer in 2010. She was 70 years old.

Camille Grammer, actress and reality TV star. The Real Housewives of Beverly Hills star underwent a radical hysterectomy in 2013 to get rid of her endometrial cancer.

The following year, in January 2014, she revealed that she managed to beat the disease:

“I just finished my chemotherapy and radiation treatment for my cancer, and can happily say, I’m cancer free! There are no traces of endometrial cancer found, and I’m incredibly lucky and blessed. I’m so thankful for the support from the sisterhood of the Real Housewives Of Beverly Hills. All of the cast members, current and past, have just been incredible to me,” she told Radar Online in an interview. 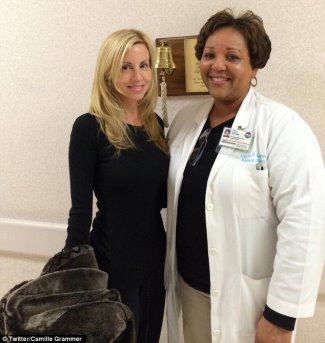 Robin Quivers, radio broadcaster. Howard Stern’s co-star is third in our list of Celebrities With Endometrial Cancer. She talked about her health condition during a Stern Show broadcast. CNN has more details:

Stern explained that right before her last day in the studio, Quivers had been attending a wedding in Pittsburgh and found she was unable to urinate. A quick trip to the emergency room, where her bladder was drained using a catheter, didn’t fix the problem, Stern said.

“Do you want to fill the audience in on what happened since then so that they understand why you haven’t been in the studio?” Stern asked Quivers during Monday’s show.

Quivers replied, “Sure. I’m ready to talk about it now, I guess. Yeah, so I went to a doctor that afternoon and for about a week the story was that nobody really understood what was going on. They knew that there was a mass in my pelvis but nobody knew what it was, and eventually it was determined that I just had to have surgery and they’d figure it out after going in.”

Quivers said she endured 12 hours of surgery after returning home to New York City. The mass turned out to be cancerous and involved uterine tissue migrating outside her uterus, she said.

“The tumor was about the size of a grapefruit,” she said. “There were two reasons that the operation was so long. It took eight hours to remove the tumor because it was so huge, it was lying on all the organs in my pelvis, and they literally had to scrape it off when they got to it. But also, they couldn’t even figure out how to operate ’cause it was so massive.”
…

After undergoing treatment at Memorial Sloan Kettering — which included chemotherapy and an ileostomy, a surgical procedure to allow intestinal waste to pass out of the body through an opening in the skin and into a pouch — Quivers said doctors told her three and a half months ago that she is now cancer-free.

“(The doctor) just looks at everything and she goes, ‘You’re cured. You’re done. You can just leave here. You know, the protocol is to scan you every three months and do all this stuff, but we don’t really have to, because you’re cured,'” Quivers said.