Nintendo Wii Side Effects: Other Interactive Electronic Games. When your children play Nintendo Wii or any other interactive electronic game, make sure that they do not overdo it and that they have enough play room to avoid injuries, researchers say.

Movements of players in the interactive games may lead to strains, sprains and injuries to the players and even bystanders, researchers from the Children’s Hospital of Philadelphia recently reported in a recent conference in San Fransisco.

They say they have counted a total of 696 video game related injuries in five years period from the data obtained by the U.S. National Electronic Injury Surveillance System. 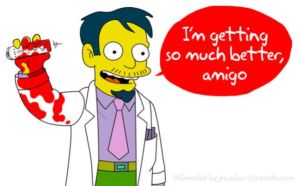 Ninety two injuries are related to the interactive games mostly a Wii, they reveal. They also say the average age of players is 16. The patients were likely to have injuries in their shoulders, ankle, feet; suffered cuts and bruises as they were doing the demands of the game, which is to mimic the movements of a particular sport, the researchers say.

Some were caused by overusing fingers and hands during marathon button-pushing games, they add. Related cases include a player who broke his foot when he fall off a Wii balance board. This even aggravated him when he was hit with the remote from his playing partner causing him head injuries.

Meanwhile, a Nintendo spokesperson warned players not to overdo the actions while playing. She says players should be reminded that the Wii remote does not need excessive and forceful actions to register movements.

Interactive games are becoming popular and are available in malls. With the rising number of accidents involving this game, better check your child when he is playing so he will spend more time enjoying it, rather than spending time with a doctor because of sprain or injury.