Tattoo Removal Cream, Laser Eraser, and Alec Falkenham’s Invention. The biggest good news today in the world of tattooing is that a 27-year-old dude from Canada named Alec Falkenham has developed a cream that easily painlessly gets rid of those damn tattoos you had when you were dating randy Andy.

Well, it is not available yet!

Alec, a PhD student who also works as a researcher at the Dalhousie University in Halifax is, with the Dalhousie Industry Liaison and Innovation (ILI) office, in the process of applying for a patent for the new technology.

There’s no word yet on when the cream will be available commercially but it does look like this new tattoo removal creak product is legit.

Says ILI health and life sciences manager Andrea McCormick: “Alec is a trail blazer in tattoo removal. He came to ILI with an idea, tangentially related to his graduate research, that had real-life applicability. His initial research has shown great results and his next stage of research will build on those results, developing his technology into a product that can eventually be brought to market.”

Falkenham says the new product will be better than laser removal technique, which is commonly used these days, because it does not cause burns and inflammations.

Here’s what Alec says about his product in an interview with CBC: “When comparing it to laser-based tattoo removal, in which you see the burns, the scarring, the blisters, in this case, we’ve designed a drug that doesn’t really have much off-target effect.”

“We’re not targeting any of the normal skin cells, so you won’t see a lot of inflammation. In fact, based on the process that we’re actually using, we don’t think there will be any inflammation at all and it would actually be anti-inflammatory.”

While we are waiting for Alec to make his stuff available in the market, what are your tattoo removal options for those of you who want to get your skins de-inked?

Tattoo Removal Cream. Well, you might want to check out a topical cream called Wrecking Balm. Does it work? Well, the product is getting very mixed reviews. For sure, there are lots of pissed off customers who are very vocal about their criticism of and complaints against Wrecking Balm.

Wrecking Balm tattoo removal does not “fade” your tattoo as advertised. That’s because it does not work at all. Their salesperson told me that a 60 day package would eradicate my old, small, lightly colored tattoo. 6 months later, no progress.

This product has not worked at all. Not even a little bit. And I was disappointed that the company sent me another kit and charged it to my credit card despite my request to not send anything more. A total ripoff.

I have been on other sites and read other forums in which so many others have been cheated. This “product” apparently has taken many others for a ride. 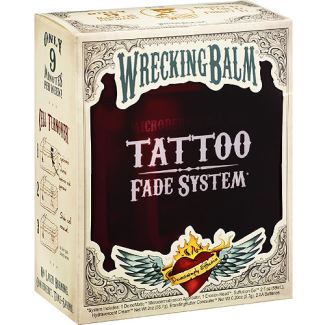 On the other side of the fence is this reviewer on walmart.com who gave Wrecking Balm five stars (out of five) and had this to say about the product:

i purchased the wrecking balm tattoo fade system and i am very satisfied. the product does work but it takes time its not a one week deal…it takes a few weeks to months of use depending how deep the ink and the consumers skin pigmentation…but i do have to say after a week i noticed a difference in how light the tattoos got. it is a very good product and i highly recomend it for anyone looking for a way to get rid of any unwanted tattoo.

Tattoo Laser Removal. Now if you really want a tattoo removal option that is not getting mixed reviews, your best bet would be tattoo laser removal. There is no doubt that it works. In fact, using laser is the gold standard when it comes to tattoo removal.

But if it is effective in removing tattoos, why are people not erasing their tats by laser? Most, actually do! But what make others hesitate is the fact that a) laser removal hurts (worse than getting a tattoo), b) it has side effects and complications especially for those with allergies, and c) it can get pretty expensive. 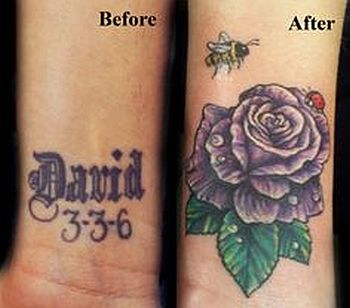 If you don’t want to go the laser route and are hesitant to use creams that may or may not work, you might want to do a tattoo coverup by replacing an unwanted tattoo with one you like.