Prof Shinya Yamanaka: Nobel Prize Win for iPS Stem Cell Pioneer? Will the Nobel Prize for medicine go to the Japanese researcher – Kyoto University Professor Shinya Yamanaka – who discovered how to make stem cells out of ordinary skin? We will know the answer on Monday when the Nobel committee announces its pick.

In 2007, Yamanaka discovered how to tinker with human skin cells so they can behave like embryonic stem cells.

Other predictions include Yamanaka sharing the award with Canadian stem cell researchers Ernest Mc Culloch and James Till who had their early stem cell identification way back 1970 or with British Cloning pioneer John Gurdon.

Japanese scientist Shinya Yamanaka may not have bagged last year’s Nobel Prize for Medicine but his work in the field of stem cell development is being recognized by Spain’s BBVA Foundation who’s giving Professor Yamanaka its Frontiers of Knowledge Award in Biomedicine.

The Japananese researcher was picked to receive the prestigious award for his breakthrough discovery in generating induced pluripotent stem (iPS) cells which are adult cells that are capable of growing into other tissues of the body. 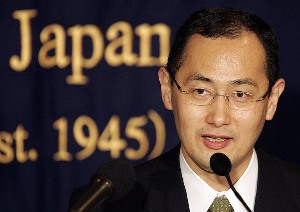 Before Yamanaka’s discovery, the conventional wisdom among the scientific community was that only embryonic stem cells can be made to replace other tissues.

The BBVA Foundation Frontiers of Knowledge Award in the Biomedicine category goes to Japanese scientist Shinya Yamanaka for “showing that it is possible to reprogram differentiated cells back into a state that is characteristic of pluripotent cells”, said the jury in its citation.

Shinya Yamanaka, who originally trained as an orthopedic surgeon, made his breakthrough discovery in 2006 when he succeeded in generating ‘induced pluripotent stem cells’ or iPS cells with the ability to differentiate into virtually any kind of tissue. Until Yamanaka proved differently, scientists believed that this could only be achieved with embryonic stem cells. iPS cells, however, are obtained from already specialized adult cells that have been reprogrammed to pluripotency, so they are once again able to differentiate into other tissues. And this represents a paradigm shift in developmental biology.

The jury emphasized the exciting new vistas these cells open up for both basic and clinical research, with personalized therapies and more precisely targeted drugs. The possibility of working with iPS cells derived from patients themselves will avoid “treating patients as guineas pigs”, the citation continues. “It will allow novel cell-based screening methods to be used to search for small molecule drugs to treat a wide range of diseases. And, ultimately, it may also allow novel and even patent-specific cell-based treatments, in particular for degenerative disease”.

Yamanaka’s work, the jury concludes, “has accelerated the possibility of translating regenerative medicine from the bench to the clinic”.

The example of Dolly
“It is a great honor to receive this award”, Yamanaka said on the phone after hearing the news. “I am deeply grateful to the many scientists whose insights I have drawn on in my own work”.

Yamanaka explained that the idea of reversing the fate of already specialized cells, then a ‘no-can-do’ in biology, came to him when studying the experiments that produced the first cloned frogs, back in the 1970s, and Dolly the sheep in 1996. “From their work I learned that we should be able to convert somatic cells back into their embryonic state. That is what inspired me to start my project”.

What he couldn‘t imagine was how quickly the results would arrive: “At first I thought it would be very difficult, it would take 20 years, 30 years or more. But it took less than 10 years. We were pleased but at the same time surprised by our own results.” He declares himself “hugely impressed by the progress of the field in these past few years”.

A key motivation in his work was to find a way to circumvent using embryos in research. “I understand there are many people who are against the use of human embryos, but I also understand how important embryonic stem cells are for medicine. That is why I started my project to convert somatic cells into stem cells without using embryos”.

New drugs “a few years from now”
Asked about the applications of iPS cells, Yamanaka mentions both drug discovery and cell therapy. Pharmacology, he believes, will be the first to benefit from this use of adult pluripotent cells: “Many people are trying to identify new drugs by using iPS cells from patients, so we hope that we will see some new treatments within a few years from now”.

However the use of reprogrammed cells in cell therapy – with cells that are the patient’s own ‘offspring’ and therefore do not cause immune rejection – will be longer in coming: “We really have to double check the safeness of iPS cells”, he cautions, “to be sure that they don’t produce cancer and other types of tumors”.

“Finding the best way to generate safe and healthy iPS cells”, is the next challenge along the way. But Yamanaka is confident that iPS cells “will become a therapeutic reality” and that “the technical obstacles can be overcome in a short period of time”.

Shinya Yamanaka (1962, Osaka) is currently Director of the Center for iPS Cell Research and Application at Kyoto University (Japan), and a professor in the Institute for Frontier Medical Sciences at the same institution. He is also an investigator at the J. David Gladstone Institutes in San Francisco and Professor of Anatomy at the University of California in San Francisco.

Yamanaka studied medicine at Kobe University, before completing his residency in orthopedic surgery at Osaka National Hospital in 1993. That same year he took up a postdoctoral fellowship at the Gladstone Institute of Cardiovascular Disease in San Francisco, where he became a staff research investigator in 1995. The following year he returned to Japan where he has been associated since 2004 with the Institute for Frontier Medical Sciences.

Shinya Yamanaka’s nomination was put forward by Robert W. Mahley, President Emeritus of The J. David Gladstone Institutes at the University of California, San Francisco (United States) and Inder Verma, Director of the Laboratory of Genetics at the Salk Institute (California, United States).