Nightmare Bacteria: 8 Important Things You Should Know About CRE Superbug. What should you do if there’s a superbug out there which is antibiotic resistant and which kills 50% of people it infects? Well, the first thing we should do is learn more about the superbug which is why we are posting this list of 8 Things You Should Know About the Nightmare Bacteria (aka CRE Superbug):

1. It Is Deadly. According to the Centers for Disease Control, the nightmare bacteria “kill up to half of patients who get bloodstream infections from them”.

The latest outbreak at the Ronald Reagan Medical Center at the University of California at Los Angeles claimed two lives. A similar outbreak at the National Institutes of Health’s Clinical Center in Bethesda, Maryland in 2011 claimed six lives from the infection.

2. It is Tough. The Nightmare Bacteria, which is “officially” called enterobacteriaceae, is able to resist the best antibiotic that we use as a last resort against bad bacterial infections (i.e., carbapenem).

3. It is Growing. Over time, the number of bacteria in the enterobacteriaceae family which has developed resistance to carbapenem (aka Carbapenem-Resistant Enterobacteriaceae or CRE) has grown from only 1% in 2003 to 4% in 2013. Moreover, according to the Chicago Tribune, “[o]ne type has increased from 2 percent to 10 percent. In all, more than 70 kinds have developed carbapenem resistance”.

4. It is All Over the United States As of February 2013, all states except for Alaska, Idaho, and Maine have confirmed CRE cases caused by the KPC enzyme. Check out the map below to see the nightmare bacteria spreading across the nation: 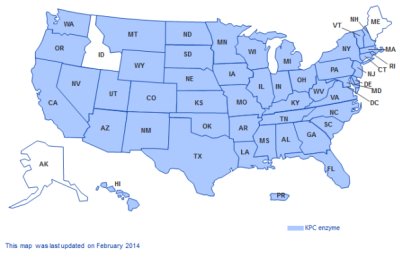 5. It Is Spread in Hospitals and Other Health Care Facilities. The good news is that you don’t get infected with the “nightmare bacteria” when someone sneezes on you. The bad news is that people get infected in hospitals, nursing homes, and clinics which are places where we are supposed to get well not catch a deadly disease.

The CDC tells us more about how CRE is transmitted:

In healthcare settings, CRE are usually transmitted from person to person often via the hands of healthcare personnel or via contaminated medical equipment. As Enterobacteriaceae can commonly be found in stool or wounds, contact with these might be particularly concerning. Ensuring the use of personal protective equipment during and good hand hygiene following exposure to the patient’s immediate environment, especially when cleaning up stool or changing wound dressings, is very important.

6. It Attacks the Sick and the Vulnerable. Healthy people don’t normally get infected with the nightmare bacteria but the sick are especially vulnerable to it. From the LA Times:

It primarily affects hospital patients and residents of nursing homes. Those at highest risk include patients who are receiving serious medical care and have been exposed to equipment like breathing machines, catheters or IVs, as well as long-term antibiotics.

About 18% of long-term acute care hospitals and about 4% of short-stay hospitals in the U.S. had at least one CRE infection during the first half of 2012, according to the CDC.

7. It May Not Literally Give You Nightmares But It Presents a Nightmare Scenario to Everyone. For those who are wondering, the “nigtmare bacteria” is not called such because it gives you nightmares when you go to sleep. It is called such because it presents a nightmare scenario to the health community in particular and to us human beings in general.

Says Centers for Disease Control Director Thomas Frieden: “CRE are nightmare bacteria. They pose a triple threat. First, they’re resistant to all or nearly all antibiotics. Even some of our last-resort drugs. Second, they have high mortality rates. They kill up to half of people who get serious infections with them. And third, they can spread their resistance to other bacteria.”

8. Good News: It Can Be Prevented. It may be deadly and all that but human beings are not totally helpless against the nightmare bacteria. The CDC has some important advice on what medical practitioners and the general public should do to help stop CRE. Check them out below:

What are some things hospitals are doing to prevent CRE infections? To prevent the spread of CRE, healthcare personnel and facilities can follow infection-control precautions provided by CDC. These include:

What can patients do to prevent CRE infections? Patients should:

Want to learn more about the nightmare bacteria? Check out this video, Hunting the Nightmare Bacteria, produced by PBS in 2013.