Fake Blueberries in Cereals and Muffins: Kellog’s, General Mills, and Betty Crocker. All fruits are ‘stars’ that pack significant health benefits, but blueberries are absolute superstars. Blueberries abound with antioxidants, vitamin C, dietary fiber, potassium and other essential nutrients, so much so that many nutritionists think of blueberries as a superfood.

They are known to be beneficial to the skin, improve brain function, prevent Alzheimer’s and dementia, and lower the risk of heart disease and cancer. At only 42 calories per 1/2 cup serving, blueberries are ideal as a smart snack option.

Unfortunately, while many food products — from ‘blueberry’ cereals to bagels to muffins — take advantage of the blueberry health wave by placing pictures of fresh berries on their packaging, none of these products contain any fruit at all.

A investigative story by the NBC2 last spring revealed that many of the ‘blueberry’ products had as ingredients blueberry flavored bits, blueberry crunchlettes and blueberry flakes — all “fake blueberries” made from sugar, corn syrup, soy bean oil, modified corn starch and water, plus blue and red food coloring.

Crunchlets is defined as a mix of sugars, soybean oil and food coloring products red #40 and blue #2, according to Fake Blueberries in Cereals, Baked Good, a January 2011 entry in Huffington Post’s food blog Slashfood.

“It’s not healthy. It’s not healthy at all,” nutritionist Marjorie Chutkin told NBC2 “They’re putting together different ingredients that look and taste like the real thing, but it’s artificial.” 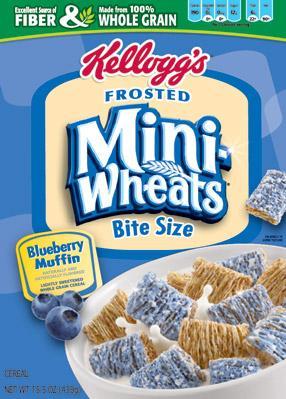 The NBC2 identified some of the products in question include Kellogg’s Frosted Mini-Wheats and Lender’s Blueberry Bagels.

Other ‘fake blueberry’ products were Kelogg’s Frosted Mini Wheats Blueberry Muffins, General Mills’ Total Blueberry Pomegranate (which contains neither blueberry nor pomegranate) and cereals, breads and muffins from Betty Crocker, according to Slashfood.

Cereal and baked goods manufacturers use fake blueberries because they are cheaper than real ones and have a longer life.

Arcadia, California farmer Ken Patterson, along with other American blueberry farmers, is calling on the U.S. Food and Drug Administration to crack down—and food product makers to step up.

“I think these manufacturers should step up and actually use blueberries if they’re going to state that they are,” said Patterson, who runs a blueberry farm in Arcadia and also sits on a national council of blueberry farmers.

A spokeswoman for the FDA told NBC2 that “food packaging and labeling must be truthful and not misleading.” This means that means pictures on the front of food products must match up with the actual ingredient list, she said.

But then the NBC2 reviewed hundreds of case files from the FDA that are publicly available. The files revealed warning letters and other enforcement actions against food companies for labeling and other marketing violations, but NBC2 did not find a single case where the agency took action against a company for misleading pictures on its packaging.

The FDA also declined to say if it is currently investigating any “fake fruit” cases, and said it take up any concerns directly with manufacturers.

In an email, a spokesman for Kellogg’s told NBC2 that “Kellogg products labeled “blueberry” include dried or pureed blueberries, or blueberry juice concentrate. All our products are labeled in compliance with applicable laws and regulations.”

For its part, General Mills, said in a statement that “This product (Total cereals) contains blueberry flavoring, and the package communicates that the product is “naturally and artificially flavored.”

Meanwhile, most consumers have no idea they’re not getting real fruit. “I thought we had laws against that,” said a shopper interviewed by NBC2 at a Fort Myers grocery store.

So if you want to make sure that you get real blueberries in your cereal and baked goodies, what can you do? Go to a real baker, Slashfood says.

For related stories check out the following: