Egg Allergy: Symptoms, First Aid Treatment, & Allergy-Free Eggs. Eggs. They’re cheap, easily available and a good source of protein. They’re also among the most versatile of ingredients, used in a variety of dishes, both savory and sweet. Eggs are also the most widely eaten foods across the world, considered kosher by the Jews and halal by the Muslims — and even lacto-ovo-vegetarians rely on eggs to meet their protein needs.

But eggs are also the cause of the most common food allergy. About 12 million Americans, 1.2 million Canadians, 17 million Europeans and four million Australians have food allergies — and mostly, this is an allergy to eggs or egg whites. Children are the most affected by these allergic reactions.

Commonly, people who are allergic to eggs suffer from wheezing, nausea, headache, stomachache and itchy hives. But some people can suffer a severe, life-threatening, multi-system allergic reactions called anaphylaxis. Their mouths, throats and the airways leading to the lungs begin to swell, making it difficult for to breathe. Blood pressure drops dangerously, and people could pass out or suffer from shock.

Each year, about 200 people die from food allergic reactions in the United States alone, and the
Food Allergy and Anaphylaxis Network (FAAN) believes that the actual figures may be much higher since allergic reactions are responsible for almost 50,000 hospital emergency room visits each year. 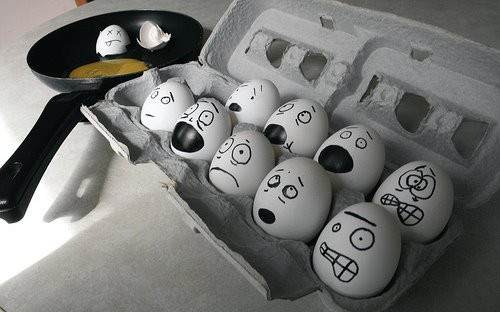 And those numbers are only of the people who suffer from what doctors call “true food allergies” that make them consistently allergic to some foods. A larger number of children have sporadic allergic reactions to foods — eggs included — at some point. According to the Asthma and Allergy Foundation of America, three to eight percent of children will have an adverse reaction to food some time in their lives.

What’s worse, preventing these allergic reactions goes beyond simply turning away from the egg stand in the grocery or supermarket. Because eggs are found in hundreds of dishes, people who are allergic to them have to be constantly vigilant — scouring ingredient lists of packaged foods and asking food attendants in restaurants or planes if their dishes have eggs in them. And what happens to children who attend public schools? The circumstances for families of children with allergies can often turn out to be a nightmare.

Because egg proteins are also used as a component of vaccines, a number of children have suffered allergic reactions after being inoculated. Some have been rushed to emergency rooms, and a number of them have even died.

In the making: allergy-free eggs
Thankfully, Australian scientists are working on developing allergy-free eggs — both for use in food consumption and the production of common vaccines such as flu vaccines.

Two centers of scientific excellence in that country are bringing their respective expertise to collaborate on this project. Australia’s national science agency, the Commonwealth Scientific and Industrial Research Organization (CSIRO) is recognized for its know-how in macromolecule modification through RNA interference (RNAi) technology, while the Deakin University is internationally recognized for its research into allergies.

There are 40 proteins in egg whites, and four of these can cause allergies. The CSIRO and Deakin University experts say they have found a way to isolate and “switch off” these four egg allergens, then reintroduce the proteins back into the egg.

This will create a hypoallergenic egg that can produce chickens that lay allergy-free eggs — at least in theory, the researchers explain.

Deakin University Adjunct Professor Dr. Tim Doran said his team would modify the proteins — and not the genes or DNA of the chickens — using RNAi technology that has previously been used by CSIRO to modify important traits in crops.

“We are not producing genetically modified chickens as part of this research,” says Dr. Doran. “We are simply modifying the proteins within the egg whites to produce chickens which lay allergy-free eggs.”

These modified eggs are expected to be able to produce chickens that lay hypoallergenic eggs — but the genes and DNA of the chicken remain unaltered.

“This is a completely novel approach in that previous egg-allergy research has cloned the egg-white-allergen genes but no-one has gone as far as to make the proteins non-allergenic,” says Associate Professor Cenk Suphioglu, from Deakin’s School of Life and Environmental Sciences.

“Previous egg allergy research has cloned the egg white allergen genes, but no-one has gone as far as to make the proteins non-allergenic,” he adds.

The research is being undertaken jointly by the CSIRO, Deakin University and the Poultry Co-operative Research Center.