Celebrities With Macular Degeneration or Stargardt’s Disease. Macular degeneration is an eye condition, usually affecting older adults, that leads to vision loss. It is prevalent around the world with as many as 11 million Americans estimated to have some form of age-related macular degeneration (AMD). Worldwide, an estimated 196 million people will have AMD five years from now or by the year 2020.

Celebrities with macular degeneration include the following:

Roseanne Barr, actress/comedian. Roseanne is first in our list of Celebrities With Macular Degeneration. In a recent interview with the Daily Beast, American actress Roseanne Barr reveals that she’s using marijuana as a medicine for her glaucoma as well as her macular degeneration.

Here’s what she said: “I have macular degeneration and glaucoma, so it’s good for me for that because I have pressure in my eyes. It’s a good medicine for a lot of things… My vision is closing in now. It’s something weird. But there are other weird things. That one’s harsh, ’cause I read a lot, and then I thought, ‘Well, I guess I could hire somebody to read for me and read to me.’ But I like words and I like looking. You do what you have to do. I just try and enjoy vision as much as possible — y’know, living it up. My dad had it, too.”

Dame Judi Dench, British actress. In an interview with the Hollywood Reporter, the Academy Award-winning actress has this to say about her condition: “I never want to make much of it, but it is difficult — very, very difficult. I can’t read anymore. I can’t paint like I used to. I try to watch movies, but it’s quite difficult. But these are all of the negatives. I don’t want to really think about all that. What I can do, I do. And I somehow get by.” 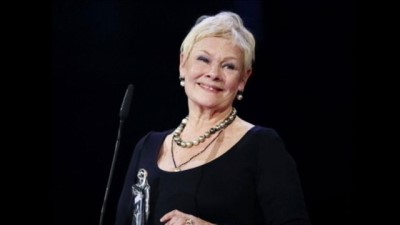 Dame Judi adds in an interview with People Magazine: “My eyes only affect me if I’m somewhere dark and there are steps and I don’t see very well. I couldn’t go on the [London] Underground now without somebody because I couldn’t work a machine. I can’t see to do it. But fortunately, I get somebody to come with me – ask any of my friends or family. I’m not going to make it something that’s going to stop me.”

Ernest Borgnine, actor. Next in our list of Celebrities With Macular Degeneration is Ernest Borgnine who, like Dame Judi, bagged an acting award from the Academy.

Borgnine was named as the spokesperson of the National Eye Institute and, in such a capacity, starred in a video aimed at making people aware of the dangers of macular degeneration.

According to newsmax.com, Borgnine used vitamin supplements to stop macular degeneration from progressing. Borgnine succumbed to kidney failure in 2012. He was 95 years old.

Stephen King, author. Responding to an oft-repeated question whether he is going blind, the prolific author had this to say via his website:

“No, I’m not. I have a predisposition–and it’s a genetic thing–to macular degeneration and that’s a disease you can read about on the internet. It eventually results in blind spots and a loss of vision but I don’t have any of the symptoms yet-just that predisposition and I think it’s something that I may have to face in the future, but, no, I’m not going blind.”

Bob Hope, actor/comedian. The great comedian had recurring eye problems towards the end of his career. He reportedly said the following: “I’ve got a hemorrhage in the right eye now, and I used to have one in the left eye. I’m a walking hemorrhage.”

From 1960 onwards, the great comedian served as honorary chairman for Fight for Sight, a non-profit organization established in the 1940s to promote eye research.

In the following interview with McLeans Magazine, Brian talks about how he was diagnosed and the early years when he was coping with his condition:

Q: How old were you when you were diagnosed with Stargardt disease? What was it like?
A: I was about 18. In 1998, [my brother] Robin and his wife both qualified for the Olympic Games and I qualified for the world championships. It was just a great year. I hadn’t even noticed I was losing my eyesight until a couple of weird things happened, like giant billboard signs weren’t making any sense to me anymore. Parts of the large words were getting hit by blind spots, so I would see T’s as being I’s. [One day] we were trying to find the address for this end-of-year gathering for all of our friends and family. I couldn’t even see the street signs, let alone anything written on them. And they were reading street signs two blocks away. We started talking about it. At that point, we hoped it was just mom’s bad eye—astigmatism or something like that; she wore glasses her whole life.

We went in and had it checked out and the doctor said, “It’s really strange, I can’t get your eyes any better with lenses.” I knew exactly what it was because of my dad and my aunt. [Both have Stargardt.] I was referred to an ophthalmologist and we did some blood tests and realized I was the carrier for the same dominant gene.

Q: What is it like adapting?
A: It was a rough couple of weeks. I was kind of embarrassed about it and I was crying a lot. There was a period of grieving and then I quickly realized I could look to my dad and my aunt as examples. He went to university and played on a bunch of sports teams. He was a teacher at an elementary school for more than 30 years. It was kind of normal in our family. It was like: “Okay, dad doesn’t drive, he rides his bike everywhere.” I remember once taking two bicycles to the hardware store [with dad] to bring home two big sheets of drywall. We stuck them on the pedals and walked the bikes home. That was the way he would do things. So having that example I realized it wasn’t going to affect me all that much. I lived my life the way my dad had lived his. It wasn’t as big of a deal as the initial knee-jerk reaction may have seemed.

Q: How much do you see now?
A: Somewhere between five and 10 per cent, I would say. I have a blind spot in the middle. My peripheral vision is basically undamaged.

Marla Runyan, American track athlete/marathoner. Marla was diagnosed with Stargardt’s Disease when she was only 9 years old. She managed to rise above her condition and won a total of five gold medals in the Paralympic Games.

Marla is also the first blind athlete to compete in the Olympic Games placing eighth in the 1,500-meter in the 2000 Sydney Olympics.

According to wikipedia and childrenscorner.org, other celebrities with macular degeneration include the following: