Can Plants Grow Inside the Body: The Ron Sveden Case. Our daily health question of the day goes like this: Can plants grow inside the human body? Well, if I haven’t heard about the story of Ron Sveden I would go, “What kind of dumb question is that? Of course not!”

But check out this story about a Massachusetts man named Ron Sveden who, apparently, had a pea plant growing inside his body. Good thing doctors were able to catch and remove it before it made things worse for Ron.

Learn more about Ron Sveden’s cause from this NBC report:

Check out these images of Ron and the plant that grew inside his body. 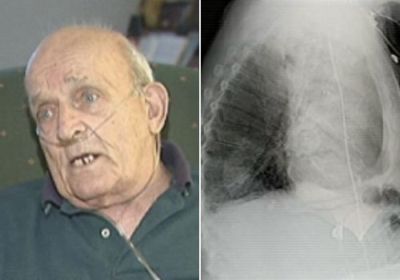 For two weeks they ran tests but they all came back negative for cancer, until one doctor found the plant growing in his lung.

“Whether this would have gone full-term and I’d be working for the jolly green giant, I don’t know. I think the thing that finally dawned on me is that it wasn’t the cancer,” said Sveden.

Ron said he never felt anything growing in his chest, just a lot of coughing. Doctors suspect he had eaten a pea at some point in the last couple of months and it went down the wrong way, and then began to grow.

At least he sees some humor in his otherwise unhealthy situation. From WHDH: “One of the first meals I had in the hospital after the surgery had peas for the vegetable. I laughed to myself and ate them.”

His wife Nancy saw the humor – and God’s hand – in it too: “God has such a sense of humor. It could have been just nothing, but it had to be a pea, and it had to be sprouting.”