Weight Loss Tips: Breastfeed Your Baby! What is the similarity between a mother going to the gym and a mother breastfeeding her baby? Both can burn 500 calories a day. Breastfeeding is a pretty cool way of losing weight, huh?

Because of this, the New York State Department of Health has launched a public health education campaign to educate mothers on the benefits of breastfeeding not just to their babies but also to the mothers themselves. Doctors behind the campaign say that new mothers should continue breastfeeding for a year or longer.

The good news is that the number of nursing mothers has increased over the past 15 years. According to the United States News and World Report, at least 75% of babies now were breast-fed for some period of time which is higher than the 60% reported 15 years ago. 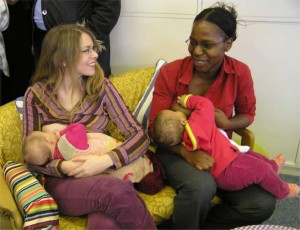 However, the Center for Disease Control and Prevention, reports that Afro-American moms (54%) are less likely to attempt to breast-feed their babies compared with 74% of white moms and 80% of Hispanic moms.

According to a recent study published in the American Journal of Medicine, burning of calories, which leads to slimming, can reduce risk of having Type 2 diabetes among nursing mothers.

So instead of paying big bucks for gym memberships and/or to buy expensive baby milk, nursing moms will be better off if they breastfeed. They’ll slim down and get sexy and they won’t have to spend time washing and sterilizing baby bottles.