Stem Cell Face Lifts: Good or Bad? Effective or Not? Although there is no sufficient scientific evidence to prove that stem cell facelifts are effective, a growing number of people are getting this done to improve their looks.

There is no doubt that stem cell face-lift is becoming more popular and that the demand for it is growing.

Dr. Nathan Newman, a cosmetic surgeon in Beverly Hills says he performed more than 200 of the procedures in the last half-decade.

Another Beverley Hills plastic surgeon, Dr. Richard Ellenbogen, can be considered to be the most enthusiastic practitioner of this procedure as he claims that he performs stem cell face lifts “about one every other day”. 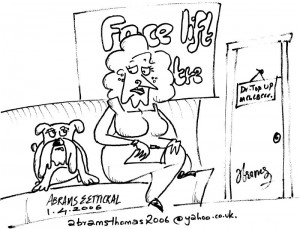 Across the U.S., a few plastic surgeons also offer stem cell face-lifts, a procedure which uses a person’s own stem cells to supposedly bring new life to aging and sagging skin.

Of course the procedure will cost you a lot of moolah!!

If you are wondering how this facelift is done, here’s a Los Angeles Times report on the matter which gives us some details:

“Unlike traditional face-lifts, stem cell face-lifts involve no scalpels or incisions in the face, and there’s no need for a general anesthesia, Newman says. Instead, he uses liposuction to collect fat from the patient, separates the stem cells from the fat, concentrates the cells and adds them back to the fat. He then injects the stem cell-enriched fat into strategic locations on the patient’s face.

Ellenbogen’s procedure is similar, although he says he uses a low-level laser to “activate” the stem cells before he injects them into the skin.”