Red Bull Addiction, Demi Moore, and Side Effects of Energy Drinks: Actress and cougar icon Demi Moore’s recent collapse from what appears to be a Red Bull overdose brings to fore a number of studies that say drinking caffeine-based energy beverages is bad for your health.

Last February (2011), in fact, a team of researchers urged United States health authorities to regulate Red Bull and other energy drinks that contain high levels of caffeine and other stimulants.

The researchers made their call after their study showed that drinking these beverages put children and young adults at risk for serious heart, kidney and liver and other health problems. The research team had looked at Red Bull, Spike Shooter, Redline and other energy drink brands that are popular with university students and adventure sports enthusiasts.

Earlier, in 2008, another study from Australia found that drinking even just one can of Red Bull increased the risk for stroke and heart attack—even in young and healthy people.

Saying they were particularly concerned over study findings that showed adverse health effects on young adults and children, the U.S. researchers called for energy drinks to be regulated.

Right now, the U.S. Food and Drug Administration does not require makers of energy drinks to prove their beverages are safe or effective, because the drinks are classified as nutritional supplements.

But Red Bull is actually banned in Norway, Uruguay and Denmark because of health risks listed on its cans.

Still, Red Bull is sold in 143 countries and U.S. sales alone are expected to reach US$9 billion this year (2012)—with half of products marketed, sold and consumed by teens and young adults.

It’s popular with university students and adrenaline sport fans, being marketed by its Austrian maker as “giving you wings.”

Overall, the market of energy drinks is fast-growing dominated by brands like Red Bull, Rockstar and Hansen Natural’s HANS.O Monster. Coca-Cola Co, PepsiCo Inc and other soft drink companies also have their own energy drinks.

Writing in the journal Pediatrics, Dr. Lipshultz says, “Across the world, there are signs that for some people who consume these drinks, there are side effects.”

“The incidence is low,” Dr. Lipshultz told Reuters Health, “but in certain groups that pediatricians care for, there may be higher risks.”

The U.S. researchers has scoured medical literature and the Internet for studies on “beverages that contain caffeine, taurine, vitamins, herbal supplements and sugar or sweeteners and are marketed to improve energy, weight loss, stamina, athletic performance and concentration.”

Reviewing these studies, Dr. Lipshultz team found that energy drinks were linked to “serious adverse effects, especially in children, adolescents, and young adults (including) seizures, diabetes, cardiac abnormalities, or mood and behavioral disorders in those who take certain medications.”

Raised heart attack, stroke risk
Meanwhile, the study conducted in Australia in 2008 showed that just one can of Red Bull could increase the risk of heart attack or stroke, even in young people.

The researchers says the caffeine-loaded beverage caused the blood to become sticky, a pre-cursor to cardiovascular problems such as stroke.

“One hour after they drank Red Bull, (their blood systems) were no longer normal. They were abnormal like we would expect in a patient with cardiovascular disease,” says Scott Willoughby, lead researcher from the Royal Adelaide Hospital’s Cardiovascular Research Centre.

Willoughby and his team tested the cardiovascular systems of 30 young adults one hour before and one hour after consuming one 250ml can of sugar-free Red Bull.

“If you have any predisposition to cardiovascular disease, think twice about drinking it,” Willoughby warns.

Demi’s Red Bull addiction
In weeks preceding her 911 emergency, Moore was drinking Red Bull obsessively to cope with her breakup with her husband, Ashton Kutcher, tabloids reported. Late in January, Moore collapsed and had to call 911 to be rushed to a hospital.

The tabloid The Sun says that Moore, a recovering addict, had a Red Bull addiction that was a decade old.

According to the tabloid, Moore, who is an endorser of the energy drink, was using Red Bull in place of food and having cases and cases of Red Bull delivered to her home as early as 2002. 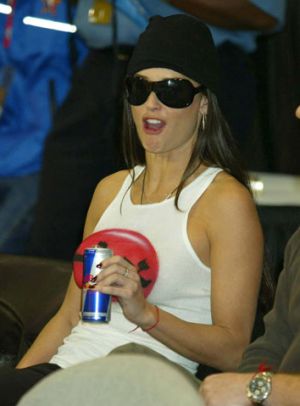 Caffeine overdose
Indeed, caffeine overdose in teens is a specific problem the U.S. researchers encountered in the studies on energy drink consumption that they reviewed.

Red Bull contains 80 mg of caffeine, around the same as a normal cup of brewed coffee, but consumers tend to drink more energy drinks than cups of coffee. Aware of this, even Red Bull’s makers warn consumers not to drink more than two cans a day.

Many dangerous ingredients
Aside from the possibility of Red Bull addiction, another problem is that energy drinks contain many ingredients, some of which have been linked to health problems.

“If it were as simple as energy drinks just containing caffeine, that would be one thing,” Dr. Lipshultz said. “The problem is they contain a lot of other substances.”

High doses of the herbal extract yohimbine, for example, which is often used in energy drinks, have been linked to raised blood pressure and heart rate. Yohimbine, like the now frowned upon ginseng, may interact with other drugs.

Until the effects of these drinks are made clear, Dr. Lipshultz says young people with attention-deficit hyperactivity disorder, diabetes, seizures, high blood pressure or heart disease should avoid the drinks.

The U.S. researchers also says that the claims manufacturers of energy drinks made were questionable.

But “we couldn’t find any evidence at all of any therapeutic effects,” Dr. Lipshultz said.

According to a 2011 Reuters report, another New Zealand study showed that just one energy drink is enough to make most kids experience some side effect, including mild ones like irritability or upset stomach.

Makers downplay Red Bull addiction and other risks
As expected, manufacturers downplayed the report. “This article just draws together material from the Internet and largely ignores in its conclusions the genuine, scientifically rigorous examination of energy drinks by reputable national authorities,” Red Bull says in an emailed statement to Reuters, which first reported on the study last year.

The American Beverage Association also told Reuters that most mainstream energy drinks contain half the caffeine of a similar-sized cup of coffee.

Created in the 1980s by Austrian entrepreneur Dietrich Mateschitz, Red Bull is based on a similar Thai energy drink.