Is Kinoki Foot Detox a Scam? Is Kinoki foot detox an effin’ scam or does it work as claimed in its adverts? We here at Health Care Zone are all for alternative medicines and other health options but these alternative options must be proven to work.

Sadly, we can’t say that Kinoki detox footpads works as claimed, i.e., that they have the ability to drain toxins away from the body.

In fact, as far back as 2008, ABC’s 20/20 did an investigative review on Kinoki and concluded that its detox thingie is nothing but a big fat scam. The National Public Radio (NPR) did a similar study and reached the same conclusion.

This transcript from the NPR review is instructive:

SCOTT SIMON, host: How do you rid your body of nasty toxins? Question for our time, isn’t it? But one company, Kinoki, says you can do it with adhesive pads that you stick to the bottom of your feet.

SARAH VARNEY: I know, you’re probably thinking: What kind of moron would believe that a toxin-sucking foot pad could work? Well, the photos in the front of the box are really convincing. There’s a before photo, a white medical bandage, and an after foot pad filled with brownish, blackish gunk, supposedly heavy metals and metabolic waste. I slapped them on my feet and went off to bed.

It’s the next morning, so let’s go ahead and pull off the pad. Ew, gross.

VARNEY: The pad is now full of just a gray, smoky mess. So now, we’re going to take this to the lab in Berkeley and see if they find any heavy metals. And it really, really stinks.

So this is my husband’s sample.

VARNEY: And these are mine. I hand over the gooey foot pads and some fresh, unused ones to John Goyette at Curtis and Thompkins lab in Berkeley.

VARNEY: The lab is EPA-certified and tests for metals, usually in consumer products like dishes and kids’ toys. Lab director Dennis Doherty(ph) looks slightly puzzled and weirdly fascinated as he cuts up the patches and stuffs each one into a test tube. Then he squirts some nitric acid into each tube – which begins to digest the foot pads.

A few hours later, they’ve turned into a liquid and are ready for testing. A glowing green machine reads the samples. And after a few minutes, out come the results. First, Doherty looks at the unused pad. The box says each one is filled with bamboo vinegar and an unknown mixture of minerals and herbs.

Mr. DENNIS DOHERTY (Lab Director): And you see, we are finding low levels of zinc, some barium, even a little bit of arsenic.

VARNEY: Dennis says there are very few products that have no metals in them at all, so these results aren’t surprising. 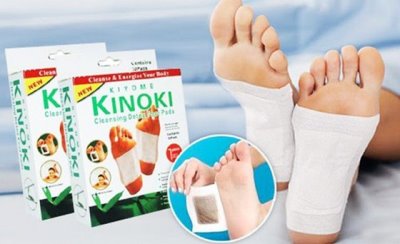 Mr. DOUGHERTY: Now this is the one from your foot. Now compared to the blank, that’s almost identical to the blank pad. There’s your husband’s and…

VARNEY: John, Dennis and the other lab technicians nod their heads in agreement. There was no significant difference between the unused pad and the gray, slimy ones.

Mr. GOYETTE: It looks like three of the same sample, basically.

VARNEY: There are just three samples, but the results are pretty conclusive: The toxin-sucking foot pads didn’t work. I take the test results to Dr. Jim Seward. He’s an environmental health physician at UC Berkeley. The news doesn’t exactly rock his world.

Dr. JIM SEWARD (Environmental Health Physician, UC Berkeley): Our bodies tend to eliminate metals through other mechanisms, primarily through the kidneys and through our intestinal tracts so that – the idea of drawing it out through the skin is really not very plausible.

VARNEY: And what about the quote-unquote metabolic waste the product claims to remove?

Dr. SEWARD: For many hundreds of thousands of years, we’ve been successfully eliminating them through the usual means, which is urine and feces. And there’s been no demonstrated need to accelerate that.

VARNEY: So, if it wasn’t heavy metals or metabolic waste, what turned the Kinoki Detox Foot Pads into a gray, slimy mess? The chemists at the lab hypothesized that there’s some ingredient that turns a dark color when exposed to moisture, like a sweaty foot. We decided to see if it was really that simple.

VARNEY: We’ve got a crowd of journalists here in the kitchen who are all waiting with bated breath to see if the pad, in fact, is going to turn black. Just hold it up over the steaming water. So we’ve got a pot of water on the stove that we’re boiling, and now we’re going to hold up the pad over the water and see what happens.

VARNEY: Yeah. A lot of disappointed faces here in the kitchen.

So there you go! We highlighted the above comment from Dr. Seward simply to point out that our body already has a mechanism to eliminate heavy metals and that we don’t need no costly foot detox. We hope you ain’t wasting no money for a stupid detox foot pad.