How fast can lung cancer spread or grow? There is no one definite answer to this question. Lung cancer behaves in different ways — the aggressive ones will grow immediately while others do not spread at all — so it is hard and foolish to put a timeline for lung cancer growth.

Still, it is important to note that lung cancer, compared to other kinds of cancer, tends to grow faster and spread earlier. This is specially true for small cell lung cancer which, to borrow the words of cancer.org, “tends to grow and spread quickly, and it has almost always spread to distant parts of the body before it is found”.

Treatment for SCLC is usually through chemotherapy alone or in combination with radiotherapy. These treatment options can extend the patient’s life as well as alleviate the symptoms. Surgery may also be a treatment option if the cancer is diagnosed at its early stage. However, if the small cell lung cancer has already metastasized or has spread to other parts of the body by the time it is diagnosed, surgery is no longer a viable treatment option. Which means, if you are the patient, the only thing left for you do do is write thirty. Hehe.

How does one “get” SCLC? For the most part, you get it through the cigarettes you began to puff mindlessly to look cool or glamorous. Statistics show that 90% of those who get small cell lung cancer are either current or past smokers.

At least the smoker version of you looked oh-so-fuckin’ awesome as this Marlboro dude, no? Incidentally, he died from lung cancer. You can read more about Mr. Marlboro, his cancer diagnosis, and his eventual anti-smoking campaign in an earlier post: Celebrities With Lung Cancer. 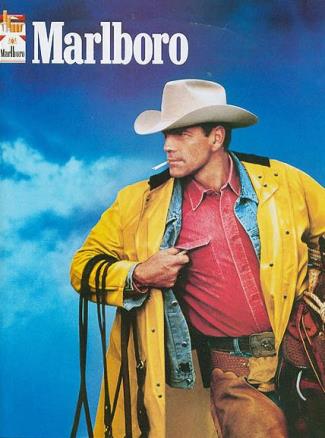 Treatment options for patients with NSCLC depends on the stage as well as other factors but treatment can include: surgery, radiofrequency ablation (RFA), radiation therapy, chemotherapy, targeted therapies (which targets changes in lung cancer cells), and immunotherapy.

Survival Rates for SCLC and NSCLC. Around the world, lung cancer is the most common cause of cancer deaths accounting for 1.59 million deaths in 2012.

For patients with SCLC, the five-year survival rate by stage is as follows:

This 5-year survival rate refers to the percentage of patients who live at least 5 years after their cancer is diagnosed. In the above data for example, 31% of those who were diagnosed when their cancer was in Stage I are still alive after five years. Many of them go on to live longer than five years. For patients who were diagnosed when their small cell lung cancer was in Stage IV, the percentage of those alive five years from diagnosis drops to only 2%.