Gerber Safe for Your Baby: Gerber Recalls Baby Formula For Off-odor. Due to complaints of foul odor and gastrointestinal problems, Gerber Products Co has voluntarily recalled some of its Good Start Gentle powdered infant formula, both the company and the federal regular announced on March 9.

In its website, the United States Food and Drug Administration clarified that the recall is limited to batch GPX1684, expiring on March 5, 2013.

The FDA recommends that consumers who have purchased the Good Start Gentle formula with that batch code and expiration date should call 1-800-487-7763 (Gerber Parents Resource Center), and a replacement will be offered.

The product poses no health or safety risk but might have an off-odor noticeable to some consumers, Gerber clarified. “In some cases spit-up and other gastrointestinal complaints have been reported,” it said. The agency appeared to back Gerber’s claims, saying only there have been reports of bad odors.

The Florham Park, New Jersey, company says it’s coordinating closely with retail outlets to get any remaining products off the shelves.

Consumers and patients are encouraged to report adverse events or side effects related to the use of these products to the FDA’s MedWatch Safety Information and Adverse Event Reporting Program at 1-800-332-1088 or online www.fda.gov/MedWatch/report.htm.

Gerber corners only a fraction of the infant formula market in the U.S., which is dominated by three big firms — Abbott Laboratories, Nestle and Mead Johnson. Altogether, the three companies manufacture more than 90 percent of all infant formula produced in the United States.

The popular baby food company wasn’t mixed up in the major infant formula scare that rocked American consumers a year after the 2008 Chinese milk scandal, which involved milk and infant formula adulterated with melamine.

2009 infant formula scare
Problems with melamine-spiked formula surfaced in the fall of 2008 in China, where unscrupulous makers purposely dumped the chemical into watered-down milk to inflate protein levels. In what turned out to be one of the worst food safety incidents in the recent years, about 300,000 people were affected, six infants died from kidney stones and other kidney damage, and another 860 babies were hospitalized.

Americans also got a scare when the FDA released confused information about a number of infant formulas that had been tainted with melamine. But concentrations in China were as much as 2,500 parts per million — about 10,000 times greater than what the FDA found in the U.S. formula.

Melamine, used as a solution to clean manufacturing equipment and in product packaging, can bind with other chemicals in urine. This can cause stones in the kidney or bladder, and in extreme cases, kidney failure.

In contrast to what had happened in China, U.S.-made formula had been accidentally contaminated with melamine during the manufacturing process, the FDA said. 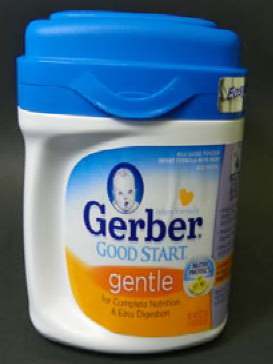 The FDA later admitted that it had released inaccurate information on what chemicals were found and in which top selling formula brands — but by this time it had sparked widespread panic and calls for a recall.

Contending that levels of melamine were extremely low in U.S.-made formula that they didn’t present a health danger, the FDA released a statement saying the infant formula is safe and parents should continue feeding it to their babies.

At the same time, it also released a statement maintaining that it was unable to identify any exposure level of melamine in infant formula “that doesn’t raise public health concerns.”

Further complicating the situation, it released inaccurate data to The Associated Press. Under a Freedom of Information Act request, the AP was able to obtain from the FDA details of a federal investigation that included a spreadsheet that listed Mead Johnson’s infant formula powder, Enfamil LIPIL with Iron as containing traces of melamine.

Earlier, the FDA had said it was studying the toxicity of cyanuric acid, and that as a precaution, it was “prudent” to assume that its potency is equal to that of melamine.

Following the lead of Illinois Attorney General Lisa Madigan, a number of legislators and health advocacy groups criticized the FDA’s handling of its test results and called on the state’s public health department and the FDA to recall both the infant formula products. They also urged both Nestle and Mead Johnson to take that step regardless of what any government agency does.

“The agency apparently withheld the results of its testing from the public for over three weeks, and then only disclosed the information in response to a FOIA request by The Associated Press,” Madigan wrote in a letter to Michael Leavitt, secretary of the U.S. Department of Health and Human Services, which oversees the FDA.

Consumers Union said that the FDA’s assurances are of small comfort to parents and caregivers.

“The FDA originally said there was no safe level for these contaminants in infant formula. So this formula is contaminated,” said Jean Halloran, the group’s director of Food Policy Initiatives. “It’s very disturbing to us that no recall has been requested.”

Last December, the death of two babies from Cronobacter, which has been found in powdered milk-based formula and can cause severe illness in newborns and chains led supermarket to pull Enfamil Newborn off shelves in an effort to protect consumers. Wal-Mart Stores Inc, Walgreen Co and Kroger were among the stores that stopped selling the products.

But after testing, U.S. health officials announced that they found no trace of potentially deadly bacteria in sealed cans of Enfamil baby formula, manufactured by Mead Johnson Nutrition Co. It said the recall had been unnecessary.