On one side stands The Coca-Cola Company, ranked by Fortune 500 as the 256th largest company in the world, with almost 140,000 employees and 2010 revenues of US$35 million, joined by PepsiCo, the world’s 137th largest company with 290,000 employees and US$57 million in 2010 earnings. Together they sold 9.4 billion cases of softdrinks in 2009 in the United States alone, cornering 90 percent of the market.

On the other, a 41-year-old nonprofit health watchdog with a little over 50 staff members, a small budget that relies mainly on subscriptions and individual donors, and a lofty mission of representing the citizen’s interests on food, health and environmental issues. Its weapon? The state of California’s Proposition 65, a local law that aims to protect state residents from toxic substances.

And yet, Goliath blinked.

On March 6, the two huge cola companies agreed to reformulate the caramel coloring in their flagship beverages to avoid new state warnings that would link their softdrinks with cancer.

But what’s so bad about the caramel coloring?
“When most people see ‘caramel coloring’ on food labels, they likely interpret that quite literally and assume the ingredient is similar to what you might get by gently melting sugar in a saucepan,” says Michael F. Jacobson, executive director of the watchdog group U.S. Center for Science in the Public Interest.

The reality is nowhere near this. The caramel color used to give sodas its brown hue isn’t made from sugar, but from a chemical compound called 4-Methylimidazole — or 4-MEI — which the National Institute of Environmental Health Sciences has linked it to cancer in mice and leukemia in rats.

More specifically, 4-MEI or 4-MI is a byproduct formed by the caramelization process when ammonia or ammonia sulfite is used. It can also be formed in roasted foods and beverages during the normal heating and browning process as well as fermentation.

“The reality is quite different. Colorings made with the ammonia or ammonia-sulfite process contain carcinogens and don’t belong in the food supply,” says Jacobson.

This is why health advocacy groups led by CSPI have long been questioning the safety of the “caramel” coloring that the soda makers use.

Last week, the groups called again on the FDA to revoke its authorization for the caramel coloring that contain the ingredient. The CSPI renewed its call after tests it commissioned detected 4-MEI in regular and diet Coca-Cola and Pepsi products — in millionths of a gram per 12-ounce can, but in quantities several times higher than a controversial benchmark set by the state of California’s Office of Environmental Health Hazard Assessment.

California to add colas to Prop 65 cancer ban
In 1986, California voters passed Proposition 65, the landmark law that aims to protect state residents from “chemicals known to cause cancer, birth defects or other reproductive harm, and to inform citizens about exposures to such chemicals.” And last December (2011), a California court ruled that 4-MEI could be listed as a known carcinogen under Prop 65. 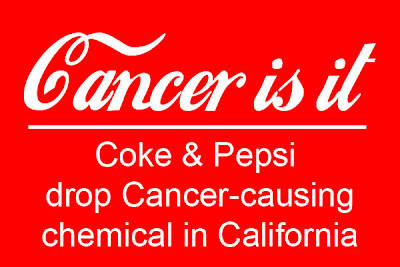 The state set a 29-microgram benchmark for 4-MEI in products, and under that statute, any product that may expose consumers to a daily level higher than that must carry a cancer-warning label on its packaging.

The levels detected by the CSPI-commissioned study in recent samples of Coke and Pepsi in the Washington area ranged between 103 and 153 micrograms — much higher than the California limit.

“Coke and Pepsi, with the acquiescence of the FDA, are needlessly exposing millions of Americans to a chemical that causes cancer,” Jacobson says in a press release, while calling on the FDA to ban the caramel coloring that contains the chemical.

They say their colas are safe, but move to comply
Unsurprisingly, Coca-Cola and Pepsi both say their drinks and their colorings are safe.

But despite this insistence, they’re changing the formulation of their colorings to comply with the California law. The new formulation softdrinks will be available throughout the U.S.

On March 9, the two softdrink makers said they would ask their caramel suppliers to change how they manufacture the ingredient to reduce levels of 4-MEI. WebMD reports that the major supplier of caramel coloring to the beverage industry has already altered its manufacturing process.