Celebrities With Herpes: Jessica Alba & Derek Jeter? A nasty rumor spread like wildfire late in 2007: “Jessica Alba is chasing the Valtrex dragon and it was Yankee shortstop Derek Jeter who gave it to her,” Hollywood gossip mags murmured.

According to the paparazzi press, the ‘Fantastic Four’ star and sex symbol — voted FHM’s Sexiest Woman Alive 2007 and the number one on AskMen.com’s list of ‘99 Most Desirable Women’ the year before — had contracted the sexually transmitted disease from the baseball star she had dated previously.

According to the website L.A. Rag Mag, the source of the story was Jessica’s assistant at the time, who claims she had to replenish the pop star’s prescription for Valtrex, an antiviral for herpes, on a regular basis.

As Jeter had also dated Vanessa Minnillo, Mariah Carey and Justin Timberlake’s girlfriend Jessica Biel by that time, the buzz for a while involved speculation of which of these hot stars had acquired the STD.

But genital herpes is no laughing matter. The disease is highly contagious and causes painful genital sores that recur in infected people.

Health experts say that regardless of the severity of symptoms, genital herpes causes psychological distress in people who know they are infected. In people with suppressed immune systems, like those who have HIV-AIDS, the sores can be severe, and the condition comes with a number of complications.

Around the same proportion of the Canadian and Australian population harbor the virus, but it tends to be lower — a little below or above ten percent of the population –in Western Europe. It’s widespread in Africa and many Asian countries.

It’s also a woman’s issue: genital herpes is more common in women and about one out of five women 14 to 49 years of age have it.

In men, about one out of nine men 14 to 49 years of age have it. This is mainly because the transmission from an infected male to his female partner is more likely than from an infected female to her male partner. Women also tend to have more severe and longer-lasting symptoms — and have a greater risk of having complications from a genital herpes infection.

What is genital herpes?
In some cases, genital herpes causes blisters and pain in or around the genitals and the rectum. Shortly after these come out for the first time, the blisters break, leaving tender ulcers or sores that take about two to four weeks to heal.

Usually, another outbreak occurs weeks or months after the first — but it is usually less severe and shorter than the first outbreak. The infection stays in the body indefinitely, but over the years, the number of outbreaks tends to decrease.

Some people have one outbreak of genital herpes; others have many outbreaks that are less painful and shorter than the first episode. In some people, genital herpes doesn’t cause any symptoms — so someone who is infected may not know it, and could pass it on to others. Doctors say that 70 percent of herpes is spread when there is no sign of infection. 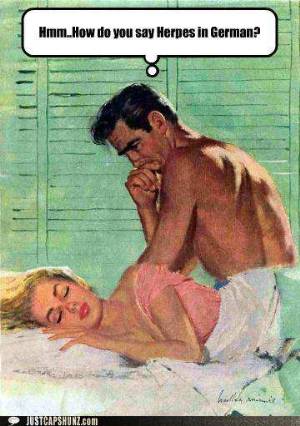 How do people get genital herpes?
The sores that are caused by HSV-1 and HSV-2 contain and release the two viruses. But these are also transferred between outbreaks from skin that doesn’t appear to have sores. Genital herpes can be transferred from an infected partner who does not have a visible sore — or may not even know he or she is infected. But a person can only get an HSV-2 infection from sexual contact with someone who is infected.

Generally, HSV-1 causes “fever blisters” or infections of the mouth and lips — but it can also cause genital herpes from oral- genital or genital-genital contact with a person who has HSV-1 infection. Genital HSV-1 outbreaks recur less regularly than genital HSV-2 outbreaks.

Are there factors that increase my risk for genital herpes?
Yes, there are, and these include:

Having many sex partners.
Having unprotected sex — or not using condoms.
Having a high-risk partner or partners — or a partner who has multiple sex partners or HSV-infected sex partners.
Starting sexual activity before age 18.
Having an impaired immune system.
Being a woman. Women are more likely than men to become infected when exposed to HSV.

Once you have been infected with the herpes virus, it stays in your body. After the first outbreak, the virus will retreat to the nervous system and remains inactive, but some factors like stress can trigger it to become active again.

Most people infected with genital herpes have very minimal or no signs or symptoms of their disease.

How often do herpes outbreaks occur?
That depends on your overall health and stress levels. On average, people with herpes experience about four outbreaks a year. The first outbreak is the most painful and takes the longest to heal, but the pain and recovery time often decrease with each outbreak.

What triggers a herpes outbreak?
Triggers vary from person to person, but some of the factors are:
• Stress
• Illness
• Surgery
• Vigorous sex
• Diet
• Monthly period

How is genital herpes treated?
There is no cure for herpes — but antiviral medications can make living with the condition easier, helping you feel better and shortening the duration of outbreaks, or prevent them.

To treat an outbreak, doctors often prescribe an antiviral ointment or pills. These medications don’t cure HSV2, but they can shorten and prevent outbreaks.

If you already know that you have the herpes virus, you can take medication daily as suppressive therapy to decrease the number of outbreaks and lessen the chance that you will pass on the virus to your partner or partners. The medications even sometimes prevent outbreaks altogether.

Severe cases may be treated with intravenous (IV) acyclovir.

How can I prevent contracting genital herpes?
Here are 10 ways to reduce your chance of getting genital herpes, according to WedMD:
• Use a condom every time you have sex.
• Don’t have sex with a partner who has sores on his or her genitals.
• Don’t receive oral sex from somebody with a cold sore. People with cold sores can pass these to your genitals through oral sex.
• If you think your partner is at high risk for genital herpes, convince your partner to be tested for genital herpes — and get tested, too.
• Don’t have sex while intoxicated. Alcohol and psychoactive drugs lower inhibitions and impair judgment.
• Have fewer sexual partners. This makes it less likely you are to be exposed to the herpes virus.
• Find out if your partner has had a sexually transmitted disease. A person with a history of STDs is more likely to have genital herpes. It may be awkward, but it’s important to ask. Honesty will help protect you — and may help your partner as well.
• Find out your partner’s sexual history. A person who has had many sexual partners is more likely to be infected with the herpes virus.
• Abstain from sex until you have a life-long monogamous partner.
• Try alternate forms of sexual intimacy. If you don’t want to be monogamous or totally celibate until you find a life partner, you can reduce your risk of getting an STD by doing things that don’t involve genital-genital contact or oral-genital contact, like mutual masturbation.

Because many STDs might not cause obvious symptoms, teens often don’t know when they’re infected — so teens should have full physical exams that include screening for STDs.

Not all teens will be comfortable talking with parents about these issues, so they should be encouraged to talk to a trusted adult. A teen who is being treated for herpes also should be tested for other STDs.

Herpes and the dating scene
Just because you have genital herpes, doesn’t mean you can’t find fun and love anymore. Genital herpes doesn’t detract from your other attractive qualities. Besides, genital HSV is very common. What’s important is that you get treated and express your sexuality in a responsible manner.

Taking antivirals
Like all drugs, the antivirals used to make herpes more bearable, have side effects. You can also be allergic to these.

Get emergency medical help if you have any of these signs of an allergic reaction: hives; difficulty breathing; swelling of your face, lips, tongue, or throat.

Serious side effects:
• pain in your lower back
• urinating less than usual or not at all
• easy bruising or bleeding
• unusual weakness

Note that there have been cases of what doctors call acyclovir neurotoxicity. Almost exclusively seen in patients with renal failure and in those taking large doses of the drug, neurotoxicity has also been reported in patients receiving oral doses of acyclovir.

This condition may be manifested by disorientation, confusion and myoclonus or brief, involuntary twitching of a muscle or a group of muscles, as well as visual hallucinations, delusions, mania, tremors, myoclonus and EEG changes. It also involves longstanding chronic renal failure or acute failure associated with acyclovir.

Patients improved either when acyclovir was discontinued or hemodialysis was performed. which improved following discontinuation of intravenous acyclovir.

Serious side effects that indicate the drug is harming your red blood cells:
• Fever, easy bruising or bleeding
• Red spots on the skin (not related to herpes or chickenpox)
• Bloody diarrhea, vomiting
• Pale or yellowed skin
• Weakness or fainting
• Urinating less than usual or not at all

Call your doctor at once, if you have any of these other serious side effects:
• Pain in your lower back
• Drowsiness, mood changes, increased thirst, loss of appetite, nausea and vomiting
• Swelling, weight gain, feeling short of breath
• Confusion, agitation, aggression, hallucinations, trouble concentrating
• Feeling shaky or unsteady
• Problems with speech or vision
• Seizure (convulsions)

This is not a complete list of side effects and others may occur. Tell your doctor about any unusual or bothersome side effect. You may report side effects to FDA at 1-800-FDA-1088. Also, check with your doctor or pharmacist about drug interactions.